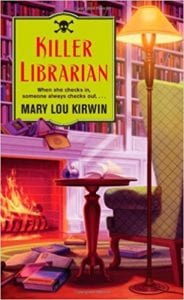 This cozy is advertised as the first book in a new cozy mystery series. It's an interesting story but is, to me, more of a romance story than a murder mystery.

The main character, Karen Nash, is a librarian in a small town in Minnesota and is a true lover of books. Karen and her significant other are getting ready to leave on a trip to England. As far as Karen is concerned, this will be a literary trip as she is really in love with the old English authors and British mysteries are her cup of tea. As she is packing for her trip, she gets a phone call from Dave, her plumber boyfriend, and he announces that he no longer cares for her and the trip is off. Karen doesn't get it and decides to go on the trip alone. So, she shows up at the airport ready to board the plane and sees Dave with a young girl on his arm and realizes that her romance is definitely over. Karen boards the plane, sits in first class, and thinks of all the ways she can eliminate Dave from the face of the earth.

After landing in England, Karen checks into a cozy Bed & Breakfast run by a charming man, Caldwell Perkins, who also loves books. They go out for the evening to an English Pub and Karen drinks a little too much while talking to a strange man and telling him of all the ways she would like to off Dave. He seems to take her very seriously and she thinks, in the following days, that said man is going to take care of Dave for her and goes on the hunt to find him and tell him that it was the booze talking and she really doesn't want to take a contract out on Dave. When she arrives back at the B&B she discovers another guest dead. There are no suspects right away because the guest seems to have died of natural causes. Eventually, Dave and his cutie show up at some of the places that Karen visits and she thinks that the man she talked to in the Pub is after Dave to get rid of him for her.

There are a lot of descriptive passages of places, things and books and not much investigating of the death. Karen does a lot of touring and she dates her B&B host and shops for books but again, there's not a lot of mystery even for a cozy. If the reader loves books as I do, especially English authors and descriptions of England they will enjoy the story.

Quill Says: If the reader is looking for excitement, she might be disappointed. If you do read this book, try and stick it out until the end because there are at least a couple of scenes that are quite satisfying.