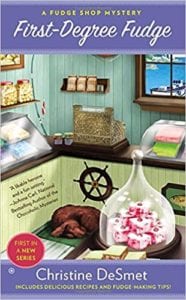 Ava Oosterling had finally returned home to Fishers’ Harbor, Wisconsin after fudging a few things in her life. Well, one anyway. Her job working on a television production, “The Topsy-Turvy Girls,” was about ready to flop after five years and she needed a change. The real catastrophe had been her marriage to Dillon Rivers, a man she’d jilted Sam Peterson for. Mistake. Dillon decided bigamy was his forte and as a lingering result Ava decided fudge would be hers. When Grandma Sophie fell and broke her leg it was time to return home and help out Grandpa Gilpa. “Ooosterlings’ Live Bait, Bobbers and Belgian Fudge” had quite the ring to it, that is if you could hack minnows next to your fudge.

Ka-ching! Ava would make a little money (in spite of the minnows) and start a new life. Her best friend, Pauline Mertens, a kindergarten teacher, would be her moral support and her new assistant, Cody “Ranger” Fjelstad, would help her whip up the fudge. First thing on the agenda was to throw together some Cinderella Pink Fudge. Isabelle Boone, the owner of the Blue Heron Inn, assured her that “We’ll make sure Rainetta gets the first piece.” Rainetta Johnson was an aging film star but there was no telling what she could do for business if she became addicted to Ava’s creation, that inimitable Cinderella Pink Fudge. If that worked, no telling what would happen next.

What happened next was what nightmares are made of. “She staggered out choking ... on your fudge,” Isabella exclaimed. Excuse me? Of course if that wasn’t enough, Jeremy Stone, a local reporter snidley claimed it was a “fudge fatality.” Sheriff Jordy Tollefson made it perfectly clear that even though Ava hadn’t been seen stuffing the Cinderella Pink down Rainetta’s delicate throat, she just might be responsible for that fudge fatality. “And,” Jordy asked her, “do they know about your diamond smuggling?” Ava’s Cinderella Pink Fudge was loaded with hot diamonds. The recipe for trouble was doubled when she found yet another body sprawled at the bottom of a staircase at the Blue Heron Inn. Would she be able to find out whodunit or would she end up making fudge in Fond du Lac?

Ava Oosterling and her cast of characters is going to charm the socks off the cozy mystery world. The introduction of her assistant, Ranger, is a novelty because he’s on the autism spectrum. Ava has confidence that he’ll succeed as an employee, but recognizes his limitations ... that is until he disappears into thin air. That of course is part of the plot. There’s that hint of romance with jilted Sam Peterson who is also Ranger’s social worker. There are lots of potentially interesting characters and persons of interest to be had in future books, including sixty church ladies. Grandpa Gilpa is a character to be reckoned with as is Grandma (“We Oosterlings are in a pickle.”). Looks like this will be a great series if the first is any indication of the fun, the humor, and the twists and turns as Ava Oosterling whips up her fudge and finds out whodunit in between batches.

Quill says: If you like your cozy mysteries with a lot of small town charm along with a dollop of fudge, you’ll love the new Fudge Shop Mystery series!