Among the Departed: A Constable Molly Smith Mystery 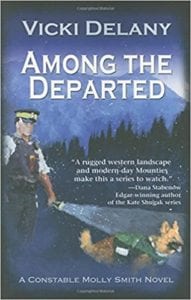 Among the Departed: A Constable Molly Smith Mystery

This delightful book is full of energy and, something like a cozy but, not quite. It looks at feeling love and affection in all the ways it can. Love for a child by parents, love for a significant other but, unable to commit, love the second time around and the love for a favorite dog (this one I liked.)

Moonlight Smith, now more commonly known as Molly, is a constable in Trafalger, British Columbia and is about to revisit a difficult time in the life of her childhood best friend. Fifteen years ago she went to her friend Nicky Nowak's house for a sleepover. After breakfast the next morning her mom picked her up. The Nowak family went off to church without Mr. Nowak. When they returned he was gone and was never seen again. His two children, Nicky and Kyle, were teenagers when this happened and, according to his wife, the marriage was a happy one with no problems.

Fall has come to Trafalgar with Winter looming not far behind. It is getting cold in Trafalgar, BC but the camp grounds are still open for a short while more. Adam Tocek of the RCMP is having a lovely evening with his significant other Molly, when he gets a call to report to the camp grounds because a little boy is missing. Adam and Molly arrive at the camp accompanied by Norman, a German Shepherd search and rescue dog in tow. The boy is found, by Norman, happily in good shape. He ran away because his father promised that he would see bears and he went looking for them. But, Norman's nose found something else and he proceeded to dig up human bones.

These bones are eventually found to be Brian Nowaks and Sergeant John Winters, of the City Police opens the investigation into Mr. Nowak's disappearance. Sgt. Winters goes to the family to report and finds Mrs. Nowak in her pajamas. Her son, Kyle, states that his mother never leaves the house. Kyle runs the roads at night and, during the day paints some very disturbing pictures in the hope that he will find someone to show them. Meanwhile, daughter Nicky, who lives in Vancouver, and the only one who left town at the time of the disappearance, comes back to see about her father. No one knows what she does for a living but, it is questionable.

There are many different plots going on in this book but they are all very understandable. The rugged mountain country is fascinating to read about and of course, I love the dogs. There is Norman, a beautiful German Shepherd and Sylvester, belonging to Molly's mom. They are prominent in some of the storylines. The writing is first class and I'm not sure why I never saw these books before but, I plan to look them up.

Quill Says: A fantastic story with many twists and turns. Creative plotting and great characters.