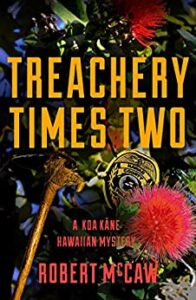 Treachery Times Two, book 4 in the Koa Kane Hawaiian Mystery series is a murder mystery that follows one man's attempt to redeem his life from a mistake of the past while pitting his wits to solve a mysterious murder.

After a volcanic eruption in Hawaii, an old cemetery is disrupted and a human body of a mutilated woman is unearthed that reveals she had been brutally murdered a few days before. Chief detective Koa Kane takes up the investigation which leads him into a dangerous labyrinth of a ruthless but connected defense contractor, FBI espionage investigation, and a secret weapon that is hidden from the public.

In his quest to find justice, a past deed begins haunting Koa as the grandson of a man he murdered for killing his father returns to the island to seek justice. Soon after, another man is wrongfully accused of the murder leaving Koa with an inner battle with his conscience. Will Koa risk losing his career, his blossoming relationship, and his reputation to own up to a crime he committed decades ago?

McCaw has penned a well-contrived police procedural worth turning the pages to see what lurks ahead. The depth and personalities of all his characters are fully fleshed out and easy to relate to. With a beguiling beginning, the narrative does not dally on its progress. This lack of sideshows makes it easy for readers to follow the plot to the end. McCaw leaves no stone unturned in his vivid descriptions as he displays the Hawaiian culture and traditions in full measure.

Further, the well-crafted dialogue between the characters and their great intensity to the plot add to the thrill of the whole book. The twists and turns present in the book along with the author's sublimity keep this mystery novel captivating and fresh. The masterful transition of present and backstories is appreciable and reflects the natural talent of the author.

Quill says: With a dollop of mystery and poised, evocative prose, this genre-bending mystery is sure to make a mark in the literary world!