Murder of the Cat’s Meow: A Scumble River Mystery 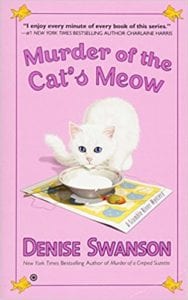 Murder of the Cat's Meow: A Scumble River Mystery

Skye Denison’s fiancé, Wally Boyd, was Scrumble River’s chief of police. He seemed to keep everything and everyone in order except for Mrs. Griggs. Skye had inherited a house from her a couple years before and every time she and Wally decided to get it on, things would crash bang or the phone would ring. Honestly, inheriting a house was one thing, but a prudish ghost was quite another. Skye was a school psychologist and wasn’t exactly into paranormal exorcism, but something had to be done. Something also had to be done with Bunny Reid, her former boyfriend’s mother with whom she was still friends. Simon bought her a bowling alley to keep her out of trouble, but that’s when the trouble began. Big time.

Bunny called Skye in a panic and asked her to rush over to the alley. What was it this time? When she arrived she spotted Elijah Jacobsen trying to strangle Alexis Hightower. One of Bunny’s "latest harebrained schemes" combined a cat show with a speed-dating weekend, a surefire moneymaker. Alexis, the judge of the cat show, told Elijah that his "Princess was seriously flawed." Alexis may have been certified to judge cat shows, but etiquette certified she was not. She insulted everyone within reach, including the elderly twins, Sonia and Sandy. "And clearly you’re a loser." Even Skye wasn’t immune to the woman’s insults.

Skye agreed to help Bunny with her "bowler disco party" after things calmed down, but first up was the "speed-dating" event. It was a darn good thing she had Wally because the selection was a tad sparse. Things went from bad to worse when Bingo, Skye’s cat, left behind a "slime pile of poo." What next? Down to the bowling alley basement to get some rags. Instead of finding a pile of rags she found Alexis out cold for good on the floor. She’d been strangled to death with a cat toy. Huh? It couldn’t have been Elijah because he didn’t have the brain power to pull this one off. Looked like Skye and Wally would have an investigation on their hands. "Can you," asked Wally, "run faster than twelve hundred feet per second?" It looked like someone was going to strike out and it wouldn’t be at Bunny’s bowling alley.

This amazingly silly ‘n sometimes serious mystery in Scrumble River will keep readers on the edge of their seats. Of course some of the humor at the beginning of the book had me falling off my seat. This book is one that starts out with a heavy dose of humor and quickly settles down as Wally Boyd and Skye Dennison join forces to solve this most unusual murder. This soon to be family duo work side-by-side, a slightly different modus operandus than many cozy mystery sleuths use as they snag clues here and there. The humor resurfaces here and there as we meet the likes of the Doozier clan and return to Bunny who claims, "I just have a personality you can’t handle." If you want a light read with a dashing dollop of droll humor and a serious sleuth, you may want to check out what’s going on in Scrumble River!

Quill says: No doubt this wild and crazy cozy mystery is one that really is the cat's meow!