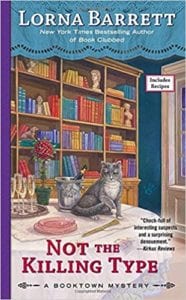 Stoneham, New Hampshire's wedding bells would be ringing away, not once but twice on the same day. Tricia Miles's former assistant, Ginny Wilson, and Antonio Barbero were tying the knot. Tricia's one-time boyfriend, Russ Smith was getting hitched as well, but she was as concerned about that as much as she cared for a stubbed toe ... not one whit. Tricia would be Ginny's maid of honor, but there were a few items on the agenda that needed tending to. The Stoneham Chamber of Commerce would be electing a new president and Tricia's sister, Angelica, would surely oust Bob Kelly from the seat. Tricia's "I nominate Angelica Miles" would have done the trick until Stan Berry decided to be a butinski and nominate his own weasely self. The nerve!

The decisive and divisive Chamber meeting was being held at the Brookview Inn, an inn Antonio managed. A little break in the action was necessary and everyone rushed to the restrooms as if their lives depended on it. Tricia was slightly overwhelmed by the ladies line and decided to head to the one by the receptionist's desk where Eleanor McCorvey was hard at work. She was also fretting over her missing letter opener. Where had the darn thing gone? Someone probably decided to swipe it to add to their soap and shampoo collection. "What kind of a sick joke is this, Tricia?" Bob growled at her. Well, she'd found the handicapped bathroom and coincidentally found Stan sitting on the loo. Stan had found Eleanor's letter opener which was conveniently stuck in his chest. No, Bob, there would be no vote after the hurried intermission.

Captain Grant Baker needed to speak to her again and it looked like their on again, off again relationship would cool during the investigation. Tricia, after all, had to live up to her reputation as Stoneham's Jinx of Death. "Lady," Pixie spouted out, "you have got the worst luck in the whole friggin' world." Pixie Poe, her assistant at Haven't Got a Clue, had a point. To add to the mess, Tricia's ex, Christopher Benson, wanted to "rekindle" a flame that had gone out with fur coats. Angelica had some campaigning to do, but Tricia had to do a little snooping because as everyone knew she was a "frustrated investigator." There was a little something she'd spotted in Stan's garbage and she had to make a trash run. "What is wrong with you?" a voice screamed at her, "why couldn't you just mind you own damned business?" Had Tricia gone too far this time?

Tricia Miles, a real "stand-up" chick, is a top-notched sleuth in my book. It seems like this series has been around for a long time and indeed it has. This is the lucky seven in the series and I've enjoyed them all. There are a few little subplots that make this one interesting, including the fact that Stan's nephew, Will, has a thing for her. Will Tricia become a cougar? There were enough things in this book from bribery, blackmail, an unusual fetish, and murder (of course!) to make this one into a page turner. Pixie Poe is really starting to become a character and a fun one at that. There are the "regulars" I've come to recognize and enjoy, but am anxious to see new ones develop. What about Grant Baker? I'm hoping that unlucky in love Tricia Miles solves her own problems and dumps him. Just sayin'. If you've met the Booktown crowd you'll definitely love this one. If you haven't, you just might like to add Stoneham, New Hampshire to your armchair destination!

Quill says: Lorna Barrett's Tricia Miles is definitely one of the most appealing sleuths in the cozy mystery world!