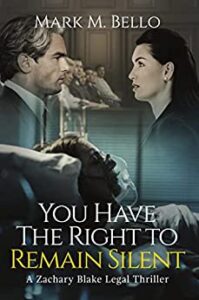 Mark Bello’s You Have the Right to Remain Silent, book 8 in his Zachary Blake Legal Thriller Series, is without question, entertainment personified!

Trouble in paradise is the recipe when a politician and his bride are on opposite sides of the political aisle. Brad Crawford, two term congressmen for the Fourteenth District in Southfield, Michigan is married to Mia Folger. Brad leans left and Mia is a staunch conservative and never misses an opportunity to publicly demean Brad and his extreme liberal views. This situation would often lend way to some rather passionate discussions. However, Mia had bigger fish to fry beyond their political differences. It seems those late hours Brad was spending with his campaign assistant, Elyssa Naylor, included a little more than typing memos and coordinating schedules. Mia was fed up and it was ultimatum time for Brad. Mia’s latest session with her therapist was quite heated and she shared her plans of how she was going to put an end to the nonsense once and for all. Little did she know that her plans to end the current state of affairs (no pun intended) could potentially land Mia in prison for the rest of her life.

Mia was beyond fired up after her therapy session. She headed to her favorite watering hole and thought about the session. More importantly, she further processed how she told her therapist she wanted to hurt Brad, but she didn’t really mean it. Rather, she wanted him to see her point of view and stop screwing around on her. She needed to calm down before heading home. Several Long Island Ice Tea’s later, Mia is poured into an Uber and on her way back to 5000 Town Center, the upscale high-rise she and Brad called home. The faithful doorman, Charlie, was on the receiving end and half carried a quite inebriated Mia to the elevator. As he turns the key to their suite and opens the door, the last thing Charlie expected to see was the equivalent of the aftermath of a tornado that recently passed through the suite. The initial shock of seeing upturned furniture and papers scattered everywhere gave Charlie pause. As he makes his way to the happy couple’s bedroom to deposit Mia and leave, Charlie will never forget the garish sight in front of him or the blood-curdling scream from Mia once she registered the bloody scene in front of her.

Mark Bello knows his way around a thriller. Mr. Bello wastes no time in delivering the proverbial body to his readers and what an exceptional job of doing just that within the first handful of pages. From that point forward, Mr. Bello places his foot on the proverbial gas pedal and floors it! There is phenomenal knowledge of law and a flow that is superbly thought out throughout this book. Clearly, Mr. Bello’s legal acumen warrants huge props. He knows how to navigate legalese and does it in a way that is entertaining, informative, and extremely interesting versus ad nauseum. Bravo Mr. Bello! I absolutely loved the banter between accomplished attorney character Zachary Blake and his trial consultant Sheri Belitz; who, by the way, happens to be a real-life person with a trial consultant firm in NYC. Might I also add, Ms. Belitz’s character gave character Zachary Blake a run for his money, or more importantly, ample opportunities to check his ego at the door. The dialogue is rich, and the cadence is spot on throughout the story. There are a plethora of twists and turns in this thriller and the only advice I have for the reader is to hold on tight because it’s one heck of a ride! There’s a reason why this is book number eight in this series...hopefully ‘number nine’ is in the works!

Quill says: You Have the Right to Remain Silent is just in time to be a must add to the top of your summer reading list!

For more information on You Have The Right to Remain Silent (A Zachary Blake Legal Thriller Book 8), please visit the author's website at: markmbello.com