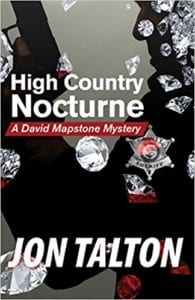 High Country Nocturne is a fast-paced mystery told in the first person by our protagonist, David Mapstone. This book is number eight in the author’s series about David Mapstone and it doesn't disappoint.

David is an accomplished man who holds a PhD in History and has been a professor at various universities. He has also worked as a deputy sheriff, a private detective and has an opinion on everything. David has been working recently for his buddy Mike Peralta; at one time as a deputy sheriff when Peralta was Sheriff, and then as a partner in a private investigation company.

As the story opens, Mike has come up missing following a robbery of diamonds. David thinks that Mike is working undercover and is not a criminal even though the diamonds have also disappeared. To make things even more interesting, Mapstone and his wife Lindsay, who is an ace hacker helping law inforcement, are in the sights of a woman assassin who is also looking for Mike. and the diamonds.

Also, there is a subplot going on as the new sheriff in town, Christopher Melton, who is definitely not Mapstone’s best buddy, asks him to put on the badge again as deputy and begin an investigation into a death that took place thirty years in the past. As if that isn’t enough, the poor man’s partner is still gone and his wife is after Mapstone to find him as Mapstone’s own wife is under suspicion about something or another. Sometimes it’s hard to keep up with everything but the writing in this book is first rate and the pace is quick. There is a lot of action and drama as Mapstone jumps from one case to another and he is sure that he will find Peralta, along with the assassin and the loot.

Quill says: This is a genuine page-turner and many readers will definitely make this a one-day read.