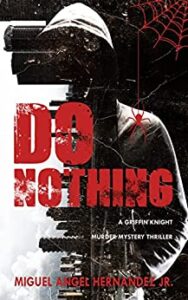 Do Nothing by Miguel Angel Hernandez Jr. revolves around Griffin Knight, an experienced homicide detective who is called up to lead an investigation into the death of twenty-seven-year-old district attorney Natalie Rosalie Costa, who was brutally murdered in her penthouse in Manhattan. He expects to find the missing link between this murder and other similarly executed past murders.

Knight's investigation points to a serial killer called The Judge, whose case file had been closed seven years before Costa’s chilling death. It is clear to Knight that a lot of people might want Costa dead because as a tough criminal prosecutor over the years, she had put many bad guys behind bars. Someone would thirst for her blood.

Evidence becomes elusive to this experienced detective, but with agility and investigative adroitness, he keeps going. Chasing a wild goose isn't an option for him. Long interviews and tons of statements on his desk still leave many questions unanswered. The list of suspects all have one thing in common - to prove themselves innocent at all costs. Knight won't stop until the killer is found.

As the action climaxes, a sinister battle of guns and hiding ensues with the tempo rising high with this signature statement, “You see Judge, it's your fault. You had a position of power, and you didn't take it seriously. You let the guilty go free and threw the innocent in prison. Well, your actions have consequences, you see. Not just for you. I didn't want to kill that cop, but you had to be selfish and let him into your house. His blood is on your hands. And your blood is on mine." Ultimately, it is blood revenge for him or nothing!

It is often laborious to create original story-lines and well-fleshed out characters who are as engaging as the ones displayed in Do Nothing. Griffin has easily managed to do both. He expertly creates sweat-inducing tension throughout the chapters making this novel enthralling to the end. The novel has a good sense of action, mystery, crime, suspense, language, and detail. The book cover and title are both intriguing and interesting and the events therein are quite breathtaking, to say the least.

Quill says: Do Nothing by Miguel Angel Hernandez Jr. is a short and fast-paced literary gem that manages to leave its readers thirsting for more. The plot is cinematic and truly feels like a 3D movie, the language so coherent and rich, making this book come out as one of the best quick reads on the market today.