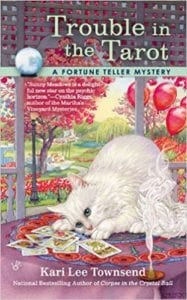 Sunny Meadows was all ready for Divinity’s Summer Solstice Carnival and had already hung out her shingle. “Sunny’s Sanctuary” was open and ready to accept anyone who wanted their fortune told. Unlike some carnival scryers, Sunny was a “real psychic” who usually worked from her home. Vicky, as she dubbed it, was a “slightly haunted, ancient Victorian house” that was also inhabited by Morty, an immortal cat. She didn’t have to wait long before she got her first customer, an older woman like her grandmother. After Fiona gave her permission to “connect with her Higher Self,” Sunny began the reading. The cards were turned and XIII Death, X The Wheel of Fortune, and XI Justice lay before them. It looked like there could be a bit of trouble on the horizon.

Unfortunately, it was just behind the curtain. “Say hello to the woman who ruined my life.” What? Fiona was talking about Granny Gert. Apparently they’d been friends long ago, but the animosity was so deep that just the sight of each other set off fireworks. Everyone at the carnival seemed to be at odds with one another, including Quincy Turner and Ozzie Zuckerman. The quibbling was getting old really fast. Sunny was hoping that Detective Mitch Stone would return to Divinity soon and they would start dating. Granny was hoping for wedding bells, but at the rate they were going that wasn’t in the cards. The only two people who seemed to be getting along were Mimi Pots and Bernadette Baldwin and no one liked them.

Granny and Fiona were having a cat fight at Gretta’s Mini Mart over a bag of flour of all things. “All’s fair,” Sunny later thought, “in the battle of the bakeoff,” but the recipe didn’t call for murder. Bernadette Baldwin was found lying beneath the wheels of a big white Cadillac… Granny’s. Unfortunately, Granny and Fiona were on the scene fighting over a box of Bernadette’s turnovers. Sunny couldn’t even begin to imagine that Granny could murder anyone. Investigating the murder would be a tricky proposition, but when she read a note that claimed, “Do what I say, or I’ll tell everybody and you’ll be ruined,” she knew she was onto something. It was Karma, but whose? Would she be able to solve Bernadette’s murder or would Granny be sent to the slammer?

Sunny Meadows finds herself in a quandary when Granny is arrested for murder. Of course everyone in Divinity is out of sorts for some reason and it’s a virtual battleground. Instead of whipping up cakes and cookies for the competition, everyone is stirring up old-time animosities. Granny’s feud with Bernadette was comical when a decade’s old squabble resurfaces. I love the characters and the New Age twist, something that adds a bit of intrigue to the mystery. There are hints of romance in the future, but it may end up being a tug of war between Sean O’Malley and Detective Mitch Stone. The twist at the end was an unexpected one as the outcome was somewhat different than I’ve encountered in any cozy mystery. If you like a little New Age, a capable sleuth, and a feisty cast of characters, you’ll love this series!

Quill says: If you want a cozy mystery series that has it all, including a New Age sleuth, you'll love Kari Lee Townsend and her Fortune Teller mysteries!