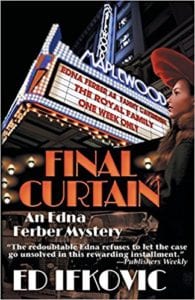 This is a terrific mystery, using the life of a real individual to solve crimes. The main character is Miss Edna Ferber, renowned author of many great books in her own right and now busy solving murders not unlike old friend Jessica Fletcher. If readers enjoy fictional stories featuring real life characters they will enjoy this crime solver.

The year is 1940 and Hitler’s Nazis have already bombed Poland and are gearing up for something much worse. In the United States, meanwhile, our heroine, Edna Ferber, has always wanted to be in a play and has been given a chance to play a part in a one-week production of the play ‘The Royal Family’ that was written by Edna and George S. Kaufman. The actors are in suburban New Jersey in a town called Maplewood and it seems that the war is a long way off. As Edna settles in for the time being, events in Europe are not thought of often. There is a lovely Inn for Edna to stay in, a great luncheonette called the Full Moon Café, whose owner makes a beautiful tuna casserole and lemonade to drink. The café is where Edna meets the other members of the cast that includes Evan Street, a very handsome individual but not a very nice man. To everyone’s chagrin, as rehearsals start, Evan makes everyone wish he was in another town bothering the citizens there. The person getting the most flack is Dakota Roberts, son and heir of the local evangelist, Clorinda Roberts Tyler.

Dakota is engaged to one of his mother’s minions, but he seems much more attached to his job at the playhouse and to a young actress just arrived in town, Nadine Novak, who knew Dakota and Evan when the three of them were in Hollywood trying to get discovered. Along with this stellar cast come two Nazi sympathizers who are beginning to stir up trouble in the town. And, lo and behold, one of the cast members is shot to death and another is hurled in front of a train. Edna is in her glory, she is sure that the reason for this is something that happened in Hollywood many years previously.

Edna is busy researching the people involved in the cases while her friend and co-author Kaufman is cracking jokes to the dismay of the people he is joking about. They are determined to solve this mystery as their opening night is coming up fast.

Quill says: This is a perfect mystery, written by an author with a great sense of humor that comes out in every page. I’m looking forward to the next Edna Ferber mystery.