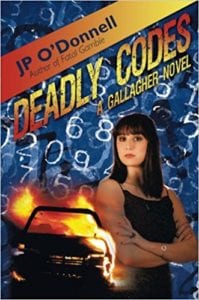 Having recently read JP O’Donnell’s debut novel, Fatal Gamble (highly recommended), I was eager to get started on his newest book, Deadly Codes. Both books center on murder cases and Daniel Gallagher, a private investigator who gets hired to solve them.

In Deadly Codes, Gallagher has married his beloved Kate and promised his new wife that he’ll find a safer occupation. He and his faithful assistant Diane are in the process of closing down his business to fulfill his pledge when Jeanne Campbell enters the picture. Jeanne’s twin sister Jennifer has been killed by a car bomb. Because Jennifer’s husband works for the NSA in counterintelligence, the authorities are convinced the bomb was meant for him. But Jeanne isn’t so sure. When she supplies information the police don’t have, Gallagher agrees to take on one last case.

Gallagher is quickly on the case, tracking down Jennifer’s mysterious lesbian lover, a contact supplied by Jeanne. The intrepid private investigator is dogged in his pursuit, and is able to uncover leads that both the police and government investigators have missed. While the formal investigation stalls, Gallagher, who comes to several dead ends himself, continues his search. Relentless in the hunt, Gallagher is rewarded with bits and pieces of the puzzle and refuses to give up. Will he jeopardize his relationship with Kate for the need to solve just one more case?

Like his first book, O’Donnell has skillfully created a fun, quick reading detective story. His easy-going writing style and short chapters keeps the story flowing at a brisk pace. The reader is brought into a realistic world of espionage to stand alongside Gallagher, picking through each scene, looking for clues. Just when I thought I had the plot figured out, O’Donnell would throw in a curve. I too, along with Gallagher wondered why “…a part-time Methodist from Massachusetts would suddenly start going to a Catholic church in Virginia.” Does it have to do with selling US secrets to a foreign country or has the not-so-faithful husband found God?

O’Donnell has crafted a likeable person in Gallagher in contrast to so many fictional private investigators who are one-dimensional characters with little or no redeemable qualities. The reader cares about him, wants him to solve his case, but also hopes he hurries home to Kate.

There is also a subplot in Deadly Codes that ties into the previous book. Is it necessary to read Fatal Gamblefirst? No, and the author does a good job of explaining what is happening, but you might still wish to start with Fatal Gamble as it’s a good story and provides background on Gallagher that helps bring him to life.

Quill says: Don’t miss Deadly Codes – it’s a great detective story that will have you looking for more Gallagher exploits.