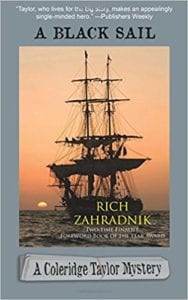 The year is 1976 and Coleridge Taylor is bored...and seasick. Used to covering exciting, and dangerous, crime stories for his beloved, and sadly defunct, Messenger-Telegram newspaper, he's now stuck covering an utterly dull story. Taylor is reporting on Operation Sail, a Bicentennial celebration taking place in the New York Harbor. Taylor can't wait to get back on solid land, write up his story and move on to something more interesting. How could he know that something far more interesting was about to float his way?

As a police reporter, Taylor has connections within the police force and is riding in an NYPD boat to view the celebration. When the call comes in for a "possible drop" (someone dumped something in the water), Mott, an NYPD scuba diver, goes in the water to see if he can find anything. Expecting to find drugs, he, and the whole crew, are quite surprised to find a body. And not just any body but the body of a woman with several bags of heroin wrapped around her waist. Must be a drug war related murder, they all guess. Perhaps a new gang moving in and someone is sending them a message to get out. Could it be that simple? Taylor was going to find out.

Now working for the City News Bureau (a news wire service), Taylor reports on the body in the harbor to his boss and gets the okay to dig around - but not before he finishes that story on the majestic ships. Taylor's first clue that the dead woman may not be associated with two rival drug gangs that are known to the police is that mobsters never involve wives and children in their killings. Perhaps it's an Asian gang...

When the body is finally ID'd as Bridget Collucci, Taylor heads out to Dobbs Ferry to interview the woman's husband. Carl Collucci is willing to talk to Taylor because he is desperate to find out who killed his wife. The local police have been no help and Carl doesn't know where to turn. Carl assures Taylor that he has disassociated himself from his father's mob dealings and is on the straight and narrow. But then, during their conversation, Carl's "public relations consultant" walks in the room, and the guy just oozes mobster. To add to the weird situation, Collucci's father-in-law arrives, along with the man's son, and it looks like war is about to break out in the room. Someone knows something but they're certainly not going to tell Taylor.

This is the third book in the Coleridge Taylor series and the second one that I've read and I have to say I enjoyed it as much as the first one I read (Drop Dead Punk). Taylor is a very likeable protagonist, with all his faults and hang-ups, and I was happy to see that Samantha Callahan (who we met in Drop Dead Punk) as well as Mason the dog, were back to soften up Taylor's gruff exterior. Because the stories take place in the 1970s, the author obviously did a fair amount of research to bring the era to life from the Bicentennial celebration to cars of the time (remember the Pacer?). Solving the murder of Bridget Collucci required a fair amount of sleuthing on Taylor's part and will keep readers guessing until almost the last page. If you love a good murder mystery, check out this series - I promise you'll be hooked in no time flat.

Quill says: Another winner in the Coleridge Taylor mystery series. When is the next one coming out???!!!

For more information on A Black Sail: A Coleridge Taylor Mystery, please visit the author's website at: www.richzahradnik.com