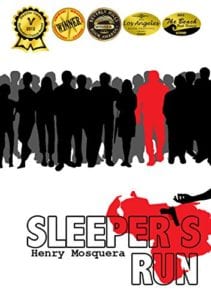 Sleeper’s Run is a great read that never stops. From the prologue to the epilogue, this book has non-stop action.

As our story opens, the main character, Eric Caine, is seen stumbling along the streets in Miami. He has just been in an automobile accident but has no memory of it. When someone offers to help him, he is quite disoriented and starts speaking in Arabic and so the police are called. The police find a military ID card among Eric’s possessions and decide to take him to the local VA hospital. We soon learn that Eric had served in the Air Force and after his discharge found work as a paramedic in Miami. The doctor at the VA at first thinks Eric is just another homeless man but, when he learns about the military ID, keeps Eric at the hospital for treatment. The doctor suggests that he start treatment for Post-Traumatic Stress Disorder (PTSD), but all Eric wants is to get away from the hospital, so he checks himself out.

A few days later, Eric stumbles into a bar and soon finds himself involved in a bar brawl. After the fight, he meets Antonio Montenegro, a native of Venezuela who befriends Eric, who had lived in Venezuela as a child. Eric has lost his job with the city of Miami due to some violent behavior and Antonio recommends him for a job with Corso International — a large company that is run by a friend of Antonio’s. Eric is hired by Corso International to keep an eye on their computer systems and catch any hardware or software problems that may arise.

The catch for Eric's new job is that he must relocate to Venezuela. Unfortunately, Venezuela is in the midst of some severe political problems because there are several rival factions that are opposing the current Venezuelan President. These factions will stop at nothing to remove him from office.

As things around him become even stranger, Eric soon learns that he is being watched. He is unable to identify these 'watchers' but thinks that they are probably government employees, perhaps the FBI or CIA. Eric attends a speech given by the Venezuelan President and has a very harrowing experience. Eric shoots the President and, because of his medical issues, he doesn't remember why he did this horrible thing and runs.

Eric has to leave the city immediately to stay alive and escape from the assassins who are sent out from both the Venezuelan government and the United States Embassy. He travels from place to place just one step ahead of these killers. At the same time, he is trying to figure out just who is involved in this plot to change the political climate of Venezuela. Readers will think they are right in the middle of The Manchurian Candidate.

The author does a fantastic job of keeping this book very fast-paced. It is hard to put down as it contains everything, including how to run from the law and how to bring the law to you. The book will remind readers of early Clive Cussler novels when his hero, Dirk Pitt, got in and out of trouble in record time but kept the reader’s attention at all times. Eric Caine is a real hero who isn't full of bluster - this is a man who doesn’t know, or care, that he is a hero. There is a John Lennon quote in the beginning of the book that says it all: Life is what happens to you while you’re busy making other plans. That really seems to say it all.

Quill Says: For this reader, Sleeper's Run was a one-day read, and I finished wanting more.

For more information on Sleeper's Run, please visit the book's website at: www.sleepers-run.com