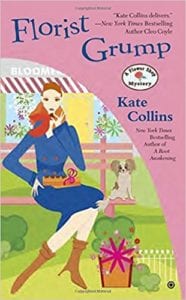 New Chapel, Indiana was once again quiet, but it hadn’t always been that way for Abigail “Abby” Knight Salvare. Abby and her husband, Marco, had been some busy at the Salvare Detective Agency and had solved a whopping eleven murder cases. Of course Abby was known as the town’s “trouble magnet,” but it is what it is and everything was coming up roses (almost literally). Business was good at Bloomers, her flower shop and the couple was settling in with her parents while they went house-hunting. Cousin Jillian had her baby, Harper Abigail Lynne Osborne, but so far the only baby on their horizon was Seedy, their kind of “ugly mutt.” Quiet was cool, but it wouldn’t be that way for long.

“The man’s been strangled, Abby,” Marco broke the news to her. Now just how was a man sitting bolt upright on the courthouse steps dead. Sergeant Sean Riley said two words that explained just why he was deader than a mackerel on ice. Rigor mortis. The man had been strangled and put on the steps. It turned out to be Dallas Stone, a familiar figure at the savings and loan, and he’d been dead for at least a day. Why on earth would anyone want to murder anyone, let alone put him on display? Seedy had tried to lead her to the scene, but Abby was in too big of a gotta-get-breakfast-sandwiches errand to stop. No way was she taking on any more cases, let alone this one.

Riley thought that Jingles the window washer was involved. He was such a gentle soul it was hard for anyone to believe that he was capable of any wrongdoing whatsoever, let alone strangling a man. However, said Jingles, who was really Samuel Atkins, knew Dallas a long time ago. There was the simple matter of a gold money clip in Stone’s pocket with good old Sam’s initials on it. It rather looked like the beloved Jingles just might have had something to do with the murder after all. Nope, Abby was not going to take this case. “Marco, you spoke for both of us again before checking with me,” she chided him, but it was a bit too late.

Jingles had skipped town even before that planted corpse was cold and he had known Dallas. Things were not looking up for him, but then again it started to look like several other people might have had reason to do in Dallas. Lavinia, his ex, had been stalking him and she’d taken a quick vacation. Then there was Kandy Cane, his girlfriend. The clues were scant, but the suspect list was growing. Dalla’s tie was missing as was a blue necklace. Not a lot to go on for a case Abby wasn’t planning on taking. An unwelcome hand suddenly shot forward and grasped her shoulder, sending a “tinge of pain down” her side. It looked like she just might be getting a bit too close to the real murderer, one who might add her to their trophy list!

Just like a good cup of coffee, any cozy mystery by Kate Collins is good from the first drop to the last...well make that murder. I haven’t visited with Abby in a while, but it’s a seamless process to step right back into her and Marco’s lives. There are those characters like her mother, Mad “Mo” Knight, and cousin Jillian who are always good for a few laughs. I do know that this series certainly isn’t getting old and in fact, it’s getting better. The plot thickened in all the right places and there were certainly enough suspects to keep me wondering. The characters still are lively and dead Dallas was definitely a victim that had more than one person who could have dumped him on those stairs. Can’t wait to see what Collins will come up with next!

Quill says: This is a fun cozy mystery with a planted corpse that more than one person might have wanted to do in!