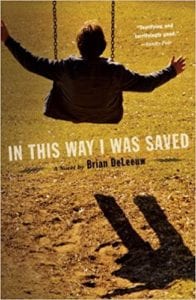 Luke Nightingale is six years old and having fun at the Central Park playground in New York City when he meets Daniel. The two play a fun game of pretending to shoot dinosaurs and then Luke invites his new friend home to the Nightingale’s Fifth Avenue penthouse. Daniel becomes Luke’s good friend and confidant, but it quickly becomes apparent that something isn’t quite right.

Daniel has entered Luke’s life during a very tumultuous time. His parents are getting divorced, and it’s not at all an amicable parting. To make matters worse, Luke’s mother, Claire, has some serious emotional problems, a condition that seems to run in her family as her mother suffered from similar troubles.

After his parents divorce, Luke finds himself living with his mother. Because his mother is unable to care for him fully, Luke learns to depend more and more on Daniel. But Daniel’s motives are not very altruistic, in fact, they’re quite sinister. With Daniel’s guidance, Luke slowly spirals out of control.

It took me exactly one chapter to realize that Daniel was not quite what he appeared to be. In a unique twist, the story is told in the first person, not by Luke, but by Daniel. That twist, along with the superb writing of this first time author, kept me glued to my seat for a reading that ran late into the night.

If you like stories where everything is neatly wrapped up at the end, this may not be the book for you. You'll likely have some questions as you turn the last page – but that’s what makes this debut novel so good. You have to keep reading in the hopes of discovering just what is happening, and what will happen. And the epilogue… DO NOT peek and read it first! – is downright creepy.

Quill says: This book is unusual, disturbing, creepy, strange and bizarre – and I couldn’t put it down!