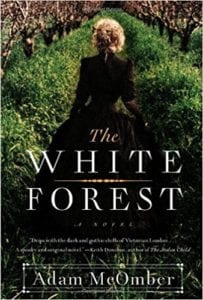 Jane Silverlake has a gift…a gift that she wishes she didn’t have. She can ‘hear’ things you would not normally think would be able to make noise - inanimate objects such as furniture, a house, jewelry - any man-made object, in fact. Jane can actually hear their souls.

Her best friends, Nathan and Maddy, know about this gift and feel completely different about it. Whereas Maddy doesn’t want to speak of it because she feels as if it’s some type of evil, Nathan loves it. In fact, there are many times he wants to just sit with Jane, hold her hand, and learn exactly where this power comes from.

Living on The Heath, this trio used to play and have a great time when they were younger and that’s still what Jane wants to do. However, she lost her mother in a very ‘odd’ death, her father barely speaks to her anymore, she lives in a house that is crumbling around her, and she has a ‘nurse’ who believes she’s some kind of Satan’s spawn. Suffice to say, it’s not an easy life.

Over the years she’s fallen for Nathan, as has Maddy, but he has slowly been changing right before their eyes. Nathan is a free spirit. He was a soldier in Crimea and hates his father and his House of Lords mentality. A true Saxon beauty, Nathan has the soul of a poet, but recently he’s been spending time in the clutches of a cult run by a very strange madman named Ariston Day. Day runs the Temple of the Lambs and has been recruiting the sons of London’s wealthy men to join his following. This is a man who wants nothing more than to find that parallel universe and leave the horrific world far behind.

Soon Maddy and Jane discover that this cult leader has far more in mind than just opening an invisible door into another world. And when Nathan suddenly disappears, Jane must enter the Temple and face-off with the evil leader who may actually have sacrificed her love in order to find paradise.

Although this plot may sound confusing, it really isn’t. The author does a fabulous job of explaining the different levels of Heaven, what ‘paradise’ is all about, and how Jane’s gift can go from a talent to a curse depending on the moment.

Quill Says: This is a unique, thrilling and unforgettable story.