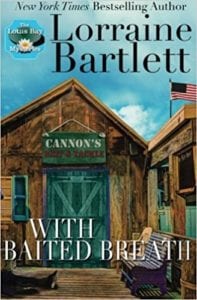 What better than the mystery of a “panty poacher”to start a new year and a new series? Tori Cannon and Kathy Grant were college roomies who, like everyone else, have vowed to stay best friends forever, but life oftentimes gets in the way. They haven’t stayed in touch and yes, life did get in the way. Tori became an English teacher, hitched up with Billy Fortner, got rid of Billy and would soon be somewhat unemployed. Let’s say dumped by the school system. Kathy was in the hotel hospitality line at the not so hospitable Batavia, New York Hampton Inn.

Now someone was rifling Tori’s panties right out of the dryer in her laundry room complex. Such incredulous behavior was amazing and rather scary in a way. The phone rang and Kathy answered. “Come for a day or two. We can talk, shop, talk, eat, talk, and maybe discuss the future.” Oh, and find out who was swiping those panties. And so they reconnected and yeah, discovered the unexpectedly weird thief! They also discovered that the fates that had split them apart for so long would bring them back together again, hopefully to solve many in this new series, “The Lotus Bay Mysteries.”

With the mini-mystery behind her, as well as the job, Tori was off to Lotus Bay. Grandma had just been laid to rest and she figured that home is where the heart is and that would be with Gramps. Herb Connor was the king of the Cannon Compound: Cannon’s Bait & Tackle shop and the Lotus Lodge. Of course when Kathy later arrived, it didn’t take long for the both of them to notice “the place was a dump” and the rooms were “crammed from floor to ceiling.” One other little thing was crammed in that mess and it was none other than Michael Jackson who was deader than a mackerel on ice.

Why on earth would Gramps “kill a paying customer?” Not very likely, but someone had strangled the life out of Michael and stuffed his mouth full of spikes. “Old Lady Bloomfield” was sticking her nose where it didn’t below (as usual) trying to pump Gramps. Detective Osborn was officially on the case, but just maybe there was someone else who could do the job better. There were those strange lights that Michael had seen, but everyone knew he was nuts. Stranger things began to happen in the antiquated dump of a building Kathy had her eye on. Was everyone a lunatic in Lotus Bay?

This is a fabulous start in Lorraine Bartlett’s new series. I do love how she came up with the novel idea of starting a mystery as an introduction to her new series. The introduction to the two main characters was made and I learned their basic histories and why they ended up in Lotus Bay. It was all so cozy and crafty in the sense that the author seemed to know exactly how to draw me hook, line and sinker into the tale. There was quite a bit of humor, especially with Gramps on the scene. Herb is quite the character and I knew I’d love this tale when he shouted out, “Holy smoke. It’s Michael Jackson.” The scene has been set and I’m certainly looking forward to reading all about Lotus Bay and some of their not-so-quaint and very quirky residents.

Quill says: Lorraine Bartlett has just taken the word 'cozy' to a new level when she landed her readership on the shores of Lotus Bay!