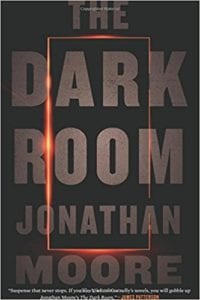 Jonathan Moore takes his audience on an intriguing journey of mystery and suspense in his current thriller, The Dark Room.

Seasoned SFPD homicide inspector, Gavin Cain, is working a cold-case. He is at the graveyard and while exhuming the body of the victim to his case he receives a call from his Lieutenant. It would seem San Francisco’s mayor, Harry Castelli, is being blackmailed and Cain is ordered to hand the exhumation off to his partner, Grassley. The Lieutenant has bigger plans for Cain and informs him the helicopter will be there momentarily to retrieve him and transport him to San Francisco’s Civic Center Plaza.

When Cain arrives at Civic Center Plaza, he’s still in the dark and isn’t sure why he was the one to draw the lucky straw to be there. He is greeted by Inspector Nagata who informs him his FBI contact will be Karen Fisher. It was late at night and Cain was getting increasingly frustrated given the lack of information he was receiving. As he makes his way into the reception lounge, the only source of light was a small, glass-shaded lamp on the receptionist’s desk. Not waiting for further instructions, Cain takes it upon himself to cross the room and enter the mayor’s office. Bent over his phone, Harry Castelli glances up and covers the mouthpiece to the phone. Castelli hangs up the phone and points to one of the two chairs. He looks at Cain, “...you’re Cain—Inspector Cain...?” Castelli elaborates and explains to Cain that he asked for him by name. “...I wanted the best, and that’s why you’re here...” Little did Cain know at that moment that those words were a mere tip to the iceberg of the tangled web he was about to jump into.

Sadly, I have not had the pleasure of reading any of Mr. Moore’s previous titles. However, after finishing the likes of The Dark Room, I will waste no time in stepping back to do so. This author is the real deal when it comes to not only knowing how to write for his intended audience, but seeing the clear path he must take from beginning to end in delivering the quintessential thriller. His prose is flawless and the set up for each scene is superb. He complements his staging with eloquent and succinct, yet powerful sentences that paint a distinct picture of the moment at hand. One sentence that resonated with me was: “...He crossed the entry hall and entered a room that didn’t seem to have any purpose except to be large…” I was barely 50 pages into this read when I came upon this sentence - I literally paused and went back to read it a couple of times I was so taken with it. This is the signature of an author who, in my opinion, values his word placement (and uses it in a way to maintain the attention of his audience). I thoroughly enjoyed this read and must say he packed some great hooks and surprises throughout. Bravo Mr. Moore. I look forward to reading your next body of work.

Quill says: The Dark Room will grip you from its onset and take you on an adventurous and intriguing journey throughout.