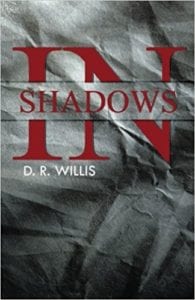 In his prequel to Lonely Deceptions, D.R. Willis casts intrigue and a bounty of twists and turns that beckons his audience to pay attention and enjoy the thrilling ride in his current murder/mystery, In Shadows.

Roth Braun navigates the dense Thailand forest with a vengeance. His mission is to retrieve the mysterious package left to him by his diabolical father. The year is 1946 and Braun’s motivation to succeed is to rid himself of a father who continues to dictate his life...a hold he has on his son even from the grave.

Meanwhile, in the confines of a formidable New Jersey winter, Nelson Davis has returned home from war. As he buries both his parents, his mother’s dying wish haunts him: '...take care of your older brother Christopher...' The commitment to honor his mother’s wish is one that was much easier made than achieved. Christopher has visions fueled by a complete lack of common sense and a whole lot of trouble. Nelson believes he can convince Christopher to join him in his venture of opening a chocolate store with the future of happily ever after. Sadly, when Christopher heads to Savannah, Georgia, with the hope of his own vision of success, Nelson has no choice but to follow. Rose Blake is a Savannah Times reporter and the one person unbeknownst to the Davis brothers, the key to connecting them to the dark and mysterious Roth Braun. The unfortunate connection will lead to the demise of one of the Davis brothers, but not before a series of unfortunate events unfold.

D.R. Willis portrays a distinct confidence when it comes to spinning up a great murder mystery. This book may be slightly more than 120 pages, but the action and adventure that is peppered with ample twists and turns is instantaneous. There is a sublime nuance of ‘pay attention’ across each page with less than a handful of characters. Willis anchors each and every one of his or her purpose in the story by assigning their worth through powerful word placement. In my opinion, the winning formula in writing a solid murder mystery is the inherent need to deliver the audience a body and do so within the first few pages. Check that box clearly Mr. Willis as you did so and did it superbly! The ending has a fantastic twist to it that one will not see coming—even a reader (like me) who insists on reading the last page of the book first! Well done Mr. Willis! After reading In Shadows,it’s a no brainer for me to seek out Lonely Deceptions and devour it as well.

Quill says: In Shadows is a murder mystery with the perfect balance of intrigue and suspense that will draw its audience in immediately and hold onto the reader to the very end.