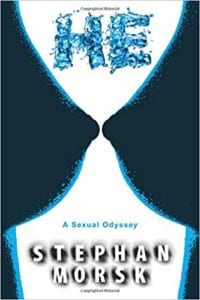 When it comes to this novella readers may be reminded of the risk-taker, Norman Mailer, who was an author seen by some as a genius, while others touted him as a 'pedestrian with limited artistic experience.'

The title (not to mention the cover), doesn't really let the reader know He is actually categorized as a work of crime fiction. The unnamed protagonist is a law student. He aids the 'madame' (who is the ex-wife of his ex-boss) every Saturday, watching her son until the nanny, Misha, arrives.

Misha is a stunning young woman who has seen the fact that 'He' stares at her with nothing but wanton lust. Although she's apparently sick and tired of the constant and unwanted admiration, Misha must feel a spark because she begins sending angry messages (AKA: Back off), yet includes a sexual gift with her first letter that only increases 'He's' attraction. In other words, she's setting up a "Fifty Shades" of her own, making 'He' into the puppy she can command.

While this relationship, for lack of a better word, continues, 'He' finds himself in the middle of a crime caper. Eve, another beautiful woman, leaves her briefcase behind in a coffee shop. 'He' sees this, considering 'He's' been leering at her the entire time she's been there. Running after her to give her back the briefcase doesn't work. Taking it home, 'He' investigates the contents (naked pictures of Eve; a cell phone; and, a strange metal rod.) Eve sets up a meet, comes to his home, gives him a show in exchange for her property, and ends up dying by poisoning. A bit of a German spy-game commences.

The dialog used is complete common sense. Unfortunately, the thousand-dollar-words inserted into the thoughts and explanations that begin at the very beginning, tend to make the story slow to a crawl. (i.e.: He found the mail an agglomeration of irrelevancies mixed with bills. Rarely did anything good come in the mail, or email for that matter, that spam-ish indifference of digitized pablum).

'He's' odyssey is based on the stereotypical women; cold, heartless tramp, savior, and aging female who just wants a younger guy for a minute or two. To better understand, take James Bond. He had his choice of females, but did not hunt them; it was always the other way around. And although he made sure they knew they were the 'beta' half of the equation, he also showed emotion. Whether for Queen and Country or hot babe, Bond was enticing because of his layers of charm, mystique and absolute class. Unfortunately, He is not in Bond's category.

For more information on He: A Sexual Odyssey, please visit the book's website at: www.morsklitmonthly.com