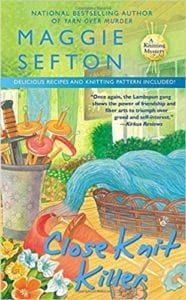 Fort Connor was welcoming two new residents and one of them would change the face of Kelly Fynn’s gang. Pete and Jennifer would be taking his niece, Cassie, under their wing after her grandfather suffered a heart attack. The young ‘tweener was most certainly welcome, but one other resident, Jared Rizzoli, was returning from a long absence and was decidedly not welcome. Jared claimed he’d paid his due to society after a long jail term, but many in Fort Connor begged to differ. His Ponzi scheme had wiped out more than a few people in town and destroyed some families. The idea that he’d returned to the scene of the crime just blew some people right out of the water.

Jared Rizzoli wasn’t there to repay anyone, nor offer up any apologies. “You,” Barbara screamed in an emotional outburst, “You’re a thief and a murderer! My father is dead because of you!” The normally calm woman who instructed part-time at Lambspun had become positively unhinged at the sight of the unapologetic Rizzoli. Malcolum Duprey, another man who’d lost everything, including his livelihood, wasn’t exactly thrilled when the man had the nerve to show his face in Fort Connor again. Was he planning on fleecing even more victims or torturing his previous ones? Scumbag, the man was nothing more than a scumbag.

Kelly watched the swirl of activity around her with amazement. It wasn’t long before someone decided Rizzoli had to get his. “Some guy died in his car last night,” Julie told Kelly over the phone. It happened in the Lambspun parking lot of all places. At first Kelly thought it might have been a suicide, but it looked like someone took their revenge on Mr. Jared Rizzoli after harboring resentment for twelve long years. Burt told her that “All Dan heard was that Rizzoli was stabbed in the throat with a knife.” Both Malcolm and Barbara had publicly confronted the man, but it wasn’t likely that they violently murdered him, or had they? Could Kelly and Burt put together the case and clear them?

Kelly Flynn has to dig deep to find out whodunit in this perplexing mystery. There were several odd things hidden beneath the surface of this winding whodunit. There were people seemingly covering up for others and a missing phone and a very unusual “mystery text” sent from it. Things are not particularly exciting in this book, but rather more perplexing. It’s business as usual with Kelly and her gang of friends, but I can see the arrival of Cassie as a possible character who will bring more life to the series. The unraveling of the mystery and the culprit’s admission was a bit rushed. Perhaps this book will be a bridge that sees more characters coming in to reanimate the series, however, Kelly Flynn remains one of my favorite female sleuths.