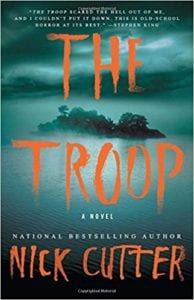 It’s the perfect fall weekend for the annual camping excursion to Prince Edward Island. Scoutmaster Tim Riggs and his teen band of boy scouts, Kent (the most popular), Ephraim and Max (best buddies and well-liked by all), Newt (the dork), and (the oddball) Shelley are bound for an adventure and so much more in the great outdoors. How could they possibly know evil would join them due to the unexpected arrival of emaciated Thomas Henry Padgett? Why is he so incredibly thin and what is with his maniacal quest to quell his insatiable appetite? How could Scoutmaster Riggs have possibly known his hospitality and offering of shelter and food to the pitiful Thomas Padgett was a choice that would upend the lives and redirect the destiny of not only Riggs’ future, but the lives of the boys in his care.

To understand the connection between Thomas Henry Padgett and Scoutmaster Tim and his scouts, one needs to take a step back. Padgett spent the majority of his life combating weight issues. How fortunate (or not) for him when he met the likes of brilliant Dr. Edgerton and the doctor’s equally talented colleague, Dr. Nathan Erikson. Padgett finally had hope and the opportunity to shed many unwanted pounds. Padgett was the doctors’ ‘Patient Zero.’ Willingly, he surrendered himself to their adept knowledge and clinical trials as they applied their scientific research. The doctors’ had spent endless hours of modifications and experimentations to perfect the Hydatid worm. Their reward was to finally put it to human testing. Padgett was their conduit and their lab-modified worm was beyond ready to transcend from Petri dish to pill form suspension for human consumption. Indeed, the worm (beast, actually), would stop at nothing once it had infiltrated and infected its human host. In mere hours it would conquer and devour every fiber of life and form that had once been governed by its host. Unbeknownst to Scoutmaster Tim and his boys, when all paths converge, they were about to become the latest innocents of a scientific trial that had gone terribly wrong.

Nick Cutter has written a book worthy of placing himself in the same arena as some of the greatest writing thrill masters of our time. Cutter’s distinct and goose bump inducing writing ability consistently taunts and wills the reader to keep going forward into the abyss of evil and terror that unfolds in The Troop. As adept as he is at scaring the crap out of his audience, Mr. Cutter demonstrates amazing control of his pen as he tempers the reader’s fear with beautifully written and thought-provoking one-liners such as: ‘The past had a perfection that the future could never hold...’ I say bravo to Mr. Cutter for being the ‘real deal.’ The Troop is a sound example and testament to your gifted writing abilities.

Quill says: The Troop provides more than a hearty portion of “food for thought” when mapping out healthy lifestyle choices!