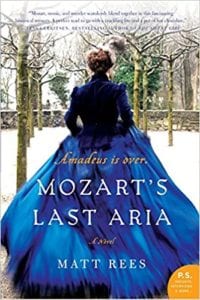 Holy magic bells and flutes, Papageno! Here’s a book about the death of Wolfgang Amadeus Mozart, and Salieri’s not the villain. Pace, Peter Shaffer and Milos Forman, Mozart’s Last Aria is not Amadeus. Matt Rees is the author of crime novels, and this is a detective novel that gives a new solution to the 200-year-old mystery of the composer’s death. Did he die of miliary fever? Rheumatic fever? The plague? History tells us that he may have been poisoned. But by whom?

As Rees has it, it’s December, 1794, and Wolfgang’s sister, Maria Anna—Nannerl—learns of her brother’s death and comes to Vienna to console the widow Constanze. Like her little brother, Nannerl was a piano prodigy all her life, and in the book she plays many of his compositions. From memory! As she investigates Wolfgang’s death, she meets Emmanuel Schikaneder, the actor and librettist for Mozart’s last opera, The Magic Flute,. and Baron Gottfried van Swieten, head of the imperial library. (Both of these men appear in Amadeus, and Salieri is mentioned briefly twice in the novel.) She also meets Count Johann Pergen, the J. Edgar Hoover of late 18th century Vienna, and several of her brother’s Masonic brothers. There is a scene among the corpses in the crypt under the church and a crucial performance in disguise…and the mystery is solved.

It’s The Magic Flute that’s the key to the mystery. It’s well known that Mozart was a Mason and that the opera is filled with Masonic symbolism. Was the composer poisoned by an angry brother Mason? If you watch the opera (and there are dozens of productions on DVD), you’ll see and hear a lot about ceremonial magic, wisdom, nature, art, the value of silence, and how to be a man. If you know anything about metaphysics, you’ll recognize a lot of ideas. In the second act, for example, Sarastro sings about forgiveness and leads a choral prayer to Isis and Osiris. Tamino and Pamina go through an initiation of fire and water. The three young boys sing that peace will come to the earth and men will be like gods. And Papageno is the perfect pagan who prefers to eat, drink, and be merry (preferably in the company of Papagena) to keeping silent and engaging in occult practices. So maybe Mozart did put some Masonic secrets in the opera. But did he have to die for it?

Quill says: Treat yourself to a few days of entertaining reading and some glorious music. Read Mozart’s Last Aria and rent a DVD or two of The Magic Flute. Watch Amadeus again, too. (Just don’t believe it.) Then consider this: maybe it doesn’t really matter how Mozart died. What’s important is that when he was alive, he composed all that music.