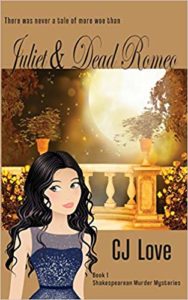 Juliet loves a policeman named Nicolo whose surname – Montague - would be anathema to her feisty father Santos, who has been in a feud with the Montague clan ever since Mariotto Romeo tried to steal his secret recipe for risotto – and might have seen his wife naked, accidentally. Juliet has kept her feelings for Nicolo a secret, and that means playing hard to get. Meanwhile her mother Italia, eager to arrange a marriage, has introduced her to the handsome Paris, who finds her quite attractive though she is not in the mood to reciprocate. But the two find themselves taking a walk on a dark night, and together discover the dead body of Mariotto floating under a bridge. Santos is summoned, tampers with the scene, and makes Juliet and Paris swear to tell no one since the corpse is on his property. But after the conflicted Juliet sends a surreptitious text to Nicolo, Mariotto’s demise is deemed murder with Santos the prime suspect. The actual perpetrator will not be discovered until many layers of truth and lie have been unveiled, bringing in a cast of characters with Shakespearean names and roles recalling the bard’s famous drama. Identifying Mariotto’s killer will expose Juliet to the ultimate threat and show her what she is capable of, not only in solving a murder case but also in the art of self-defense.

Author C.J. Love has set out in a new direction in her writing, moving from the romance genre to this whodunit saga, with Juliet and Dead Romeo already designated as Book 1 of a series. She cleverly injects notable names from the original script: Tybalt (kind of a drunk, hothead, sneak, rather like the original character); an overbearing mother bent on finding Juliet a husband; lovely Roseline who has the power to charm Juliet’s would-be lover and evoke her jealousy; and a priest, Father Larry, who knows enough herbal lore to concoct a poisonous potion. A few other names and situational echoes borrowed from the bard crop up in the narrative, but even those who have never read a word of Shakespeare’s plays will be hooked by the strong personalities and the action-packed storyline in this strong new offering. Love’s crime thriller begins with a brawl and ends with a fight to the near-death, yet remains centered on the heart of the matter: who loves whom, and how and when will they acknowledge it and go on an actual date, instead of mainly meeting on several well-placed balconies?

Quill says: C. J. Love’s Juliet and Dead Romeo innovates by melding modern parlance with reference to a great classic, throwing out alluring clues and revealing the development of a nervous, doubt-ridden girl into an adventurous, self-confident woman poised to solve more mysteries in future volumes.

For more information on Juliet and Dead Romeo, please visit the website: lovecj316.wixsite.com