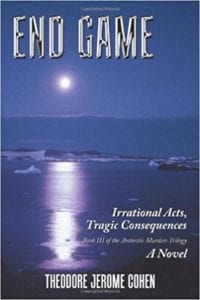 Eduardo Bellolio smiled to himself as he leaned over the edge of a crevasse and saw Cristian Barbudo and Ted Stone. One man lay dying while the other, though seriously injured, would ultimately survive the Antarctic cold. Cristian, who knew Eduardo had rifled the safety deposit boxes in the Banco Central vault, would not live to tell any secrets. Ted, a young American grad student, would soon be holding his friend's corpse on a frozen ledge. So what if he was a maldito? He was going to be a very rich one, but he never could have known that Captain Roberto Muñoz would be forced to return from the treacherous waters to save Barbudo and Stone. Muñoz would become a reluctant hero, but because Cristian was a friend, Muñoz would quickly become a vengeful murderer. Bellolio would feel his evil touch.

It had been more than three years since Ted had been rescued, but the painful memories had been etched into his brain and a six-inch scar on his leg would always remind him of the unforgiving North Antarctic Peninsula. Chilean Corvette Captain Mateo Valderas was beginning to unravel the mystery behind the strange deaths that were somehow connected with the Banco Central incident that had happened during the great Chilean earthquake in 1962. Six men and a woman, Angelica, who had been pushed down a flight of stairs, had died, all of whom were somehow connected to Muñoz, but how could he prove it? The man was incredibly cunning and diabolical. The money and hints of magnificent wealth were surfacing, but more importantly, Ted’s life might be at stake.

The worst was Osario who had sizzled like a burnt piece of bacon. What did Muñoz have in store for Ted? Lieutenant-Commander Antonio Del Rio and Valderas would work together to untangle the mystery. Perhaps he was slipping when he accompanied Señora Maria Barbudo, Cristian’s widow, to a concert. She was wearing “a large piece with emeralds and diamonds in a floral setting.” (pg. 41) Did that fool not realize that its owner had inventoried its loss with the authorities? Valderas had also interrogated Father Mauricio Salgado when it became known that Muñoz had been donating time and money to “the restoration of the red-walled Church of Saint Francisco—La Iglesia de San Francisco.” (pg. 48) What was this nonsense of not being able to break the Seal of Confession? Valderas knew that Muñoz had connections with the Don Larena’s cartel, but the Church?

Ted Stone had no idea that when he had decided to return to participate in the 20th Chilean Expedition to the Antarctic that his life, as well as that of his companion Grant, would be in jeopardy. Valderas had to pull out all stops and enlisted the help of Captain Elias Candía, a “forensic financial analyst.” Elias took one look at the evidence and said, “This is like trying to unravel a large recluse spider’s web..." Murder, money, Muñoz. They all fit together like one of those 1,500 piece jigsaw puzzles, but the pieces had been thrown to the winds and Valderas had to gather them up again and piece them together. He could almost hear the evil gears churning in Muñoz’s mind, but would he be able to stop him before he struck again?

This finale to the Antarctic Murders Trilogy is akin to the ending of a fine meal ... you simply sit back and exclaim, "My, wasn't that good!" And it was. I certainly enjoyed reading this trilogy, never quite knowing what was coming next or, should I say, who was going to be the next victim of Muñoz's. This book, as can all three in the series, stand alone, but in order to get the most enjoyment, as with any trilogy, it's best to start at the beginning and savor them all. The leisurely pace of the first in the trilogy, Frozen in Time: Murder at the Bottom of the World, is soon set aside and a more urgent pace is adopted when the full extent of an evil murderer's vengeful wrath is exposed. The reader, who knows who the culprit is from the beginning, will sit on the sidelines cheering on the Naval Intelligence force. The key is not who did it, but how he did it, and how he could have fooled them all. Do you think you are a match for Muñoz? The only way you are going to know is by reading the trilogy!

Quill says: If you want an enigmatic, exciting, yet somehow relaxing mystery, End Game will take you from the depths of an Antarctic crevasse to the top of the steeple of the Church of Saint Francisco—La Iglesia de San Francisco—in search of the evil secrets of Captain Roberto Muñoz ... a man who cut his teeth at the feet of the insidious Larenas cartel!