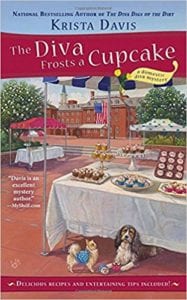 Sophie Winston had long ago broke up with Wolf, but there was yet another breakup in Old Town that was very unexpected. Joy had blind-sided Renee and opened up her own cupcake shop, Sugar Mama, right across the street from Sugar Baby. It took a lot of chutzpah to duplicate almost everything except the name. A Cupcake War was just what everyone needed with the Cupcakes and Pupcakes fundraising event coming right up. Yet another war was brewing when Clarissa Osborne started getting on her case about something to do with Wolf. “Have you no shame? Have you no morals?” Huh? Must have been something in the water that was making everyone act a little off. Well, maybe a lot off.

Nina Reid Norwood, Sophie’s BFF, agreed. "People are crazy, nutso, cuckoo, and just plain weird." While Sophie and Nina were trying to find homes for animals at “Cupcakes and Pupcakes Adoptions,” a gorgeous guy actually asked Sophie out. Nina was all for her getting together with Alex, but things seemed a tad off. “You steered me toward my last boyfriend,” Sophie exclaimed. “Need I remind you what a mess that turned out to be?” The only one who seemed to be having any luck, oddly enough, was hopeless Humphrey Brown, the mortician. Every other woman in town seemed to be fawning over him.

Just when Sophie and Nina needed his help at the adoption booth, Humphrey turned up missing. Sophie headed over to fetch Humphrey at Sugar Baby and found him tending the cash register. If she didn’t know better, Sophie would have sworn that Humphrey was helping himself to a bit a cash. No money was missing, but one thing was missing and that was Muffin. The smell of burning cupcakes was wafting throughout Sugar Baby so she couldn’t have been gone long. “Why would anyone hurt Muffin?” cried Humphrey. “She wasn’t much more than a kid.” Muffin was lost, but now she’d been found ... dead under a bed. There was something really strange going on in Old Town, but would Sophie be able to find out who killed Muffin before the killer struck again?

I love the cast of interesting and quirky characters in this series, including the cast of critters. Krista Davis does know how to keep readers interested and I’m no exception. Even nasty curmudgeon, Maurice Lester, has a bit of appeal in his own way. There’s a light touch of humor throughout the book and everyone will chuckle when Nina claims Sophie “Only dates murder suspects.” Of course, as Sophie claims, you have to add the ones who are “married, separated, have missing wives, or are murder suspects.” The tale moves right along and no one will be able to figure out whodunit until practically the last page is turned. There are a lot of cupcake and pupcake recipes in the back to try.

Quill says: Krista Davis definitely knows how to put the right touch of frosting on her domestic diva mysteries to create the perfect, delectable cozy mystery!