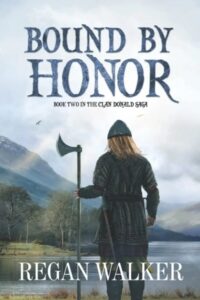 Bound by Honor (The Clan Donald Saga, Book Two) is the second installment in the Clan Donald Saga and a glisteningly ambitious novel that offers more than meets the eye with its crisp storytelling and impeccably built characters.

Here, readers are introduced to two men of royal blood, Angus Macdonald and his compeer Robert Bruce, who forge a binding friendship between them in their youth that shape the destiny of Scotia during the turbulent medieval times. When his father suddenly dies and his elder brother is murdered, Angus becomes the new Lord of the Isles and together with Robert, endeavors to out battle his rivals along with securing the Scottish crown for Robert from the treacherous King Edward 1.

The story follows the two men, their love lives, and their devotion to each other. Their pledge of honor is a constant in the story despite the chaos and mayhem that characterize this period and will hold them together for years to come. Angus marries the beautiful and strong Aine O'Cahan, a woman who stands by him in his pursuit of peace and outwitting the English. Robert on the other hand has his eyes set on Elizabeth De Burgh, a Norman heiress and a motivating factor in his life. Together, these characters unfurl a captivating tale of friendship, courage, love, and heroism during a time when the Englishmen and their fellow countrymen rivaled for the control of the Scottish crown.

Outlying yet august, the rugged terrain of the Scottish north comes alive in this literary ode through its vivid descriptions. The text pulls back the curtain on a legendary chateau teeming with history and myth. One of the book's masterstrokes is the lyricism that runs through the prose, adding grace to the story, and ultimately making it irresistible. The presence of a strong plot, fast-paced and intricate, further elevates this book to a level beyond its genre. Author Regan Walker certainly triumphs in summoning to life a natural Middle Age period that is thoroughly researched resulting in a rich tapestry that effortlessly blends facts and fiction.

The story is told compellingly and Author Walker has the adeptness of creating characters that are real and memorable, allowing readers to enjoy the labyrinths of the mind of Angus, the central protagonist. Essentially a continuation of the first volume of the series, Bound by Honor may be read as a standalone novel. It does not dally in its progress but throws readers right into the heart of the story. Its beguiling beginning too serves as a literary canapé creating a vivid imagination in a reader's mind.

Altogether, Bound by Honor by Regan Walker is a historical thriller that delivers annexations and conquests with gusto and this is conveniently whisked with the right amounts of dialogue culminating in a world of adventure. Further, Walker does a brilliant job serving up seemingly endless pages of British history and lore.

Quill says: Bound by Honor by Regan Walker deserves acclamation for its keen eye for detail and graceful writing skill and is a valuable read in its own right.

For more information on Bound by Honor (The Clan Donald Saga, Book 2), please visit the author's website at: www.reganwalkerauthor.com/

He Wears A Blue Bonnet

When I Was Better

Seeing Glory: A Novel of Family Strife, Faith, and the American Civil War

Transgression: Hitler, Mirka, Mireille and Me

The Light Among Us: The Story of Elizabeth Carne, Cornwall

Season of My Enemy (Heroines of WWII)

Sunflowers Beneath the Snow

A Promise of Remembrance

Grounded Eagles: Three Tales of the RAF in WWII

The Reluctant Queen: The Story of Esther

The Zodiac Revisited, Volume 1: The Facts of the Case

The Abalone Ukulele: A Tale of Far Eastern Intrigue

Traitors for the Sake of Humanity: A Novel of the German Resistance to Hitler

The Travels of Ibn Thomas

My Name Is Saul: A Novel of the Ancient World

Miep and the Most Famous Diary: The Woman Who Rescued Anne Frank's Diary

The Emperor Strikes Back: Frederick II's War against his Vassals

I, Claudia: A Novel of the Ancient World

The Race to Save the Romanovs

The Pirate Bride: Daughters of the Mayflower, Book 2

The Last Crusader Kingdom: Dawn of a Dynasty in Twelfth-Century Cyprus

The Invention of Celebrity

To Shine With Honor - Book One: Coming of Age

Envoy of Jerusalem: A Biographical Novel of Balian d'Ibelin

Along the Infinite Sea

The House of Dreams

Stones in the Road

The Wild West of Louis L'Amour: An Illustrated Companion to the Frontier Fiction of an American Icon

The Last Summer at Chelsea Beach

The Curse of Anne Boleyn

Death of a Diva: From Berlin to Broadway

The Price of Blood

Sprouting Wings: Book One in the Alan Ericsson Series

Things Half In Shadow

What the Lady Wants: A Novel of Marshall Field and the Gilded Age

Inmate 1818 and Other Stories

The Garden of Letters

The Romanov Sisters: The Lost Lives of the Daughters of Nicholas and Alexandra

The Wild Dark Flowers: A Novel of Rutherford Park

Enduring Courage: Ace Pilot Eddie Rickenbacker and the Dawn of the Age of Speed

Sinners and the Sea: The Untold Story of Noah's Wife

Indivisible? The Story of the Second American Civil War

Heart of a Falcon

Through Irish Eyes: A Visual Companion to Angela McCourt's Ireland

Dogs of War: The Stories of FDR's Fala, Patton's Willie, and Ike's Telek

The Story of the Costume Drama

Emanuel and the Hanukkah Rescue

The United States Constitution: A Round Table Comic Graphic Adaptation

Ghost Train to Freedom: An Adventure on the Underground Railroad

Twice as Good: The story of William Powell and Clearview, the only golf course designed, built, and owned by an African-American

The Women of the Cousins' War: The Duchess, the Queen, and the King's Mother

Ripley's Believe It Or Not! Strikingly True

Innocent War (Behind An Immigrant’s Past Series, Book I)

Shadow of a Quarter Moon

Time of the Quickening: Prophecies for the Coming Utopian Age

From Jazz Babies to Generation Next: The History of the American Teenager

How to Read World History in Art

The Wonderful Future That Never Was: Flying Cars, Mail Delivery by Parachute, and Other Predictions from the Past

Valley Forge: George Washington and the Crucible of Victory

Voodoo Histories: The Role of the Conspiracy Theory in Shaping Modern History

Norah: The Making of an Irish-American Woman in 19th Century New York

v2036: A Tale of Sociopolitical Change in a Militarized Venezuela

Did Castles Have Bathrooms?: And Other Questions About the Middle Ages

The Jewel of St. Petersburg

The Library: An Illustrated History

The Secret History of the Pink Carnation

2012: The Year of Changes – Prophecies about Barack Obama, Vladimir Putin, Other Leaders, and the United States

It Simply Must Be Said: A View of American Public Education from the Trenches of Teaching

The Hidden Scroll: An Archeological Adventure

The Throne in the Heart of the Sea

Lies the Government Told You: Myth, Power, and Deception in American History

Daughters of the Witching Hill

The Keeper’s Gift (or Uley’s Journal)

The Sweet War Man: A Novel

Asleep: The Forgotten Epidemic that Remains One of Medicine's Greatest Mysteries

Along the Fortune Trail

Snapshot: The Visual Almanac for Our World Today

Why We Don't Kill Spiders

A Land Beyond Ravens

Sisterhood Of Faith: 365 Life-Changing Stories About Women Who Made A Difference

Faust: My Soul Be Damned for the World, Vol. 1

Faust: My Soul Be Damned for the World, Vol. 2

Sinking the Ship of State: The Presidency of George W. Bush