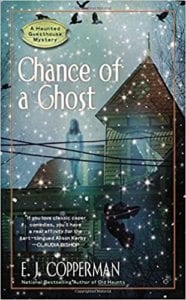 Alison Kerby’s mother, Loretta, had the ability to “see and speak to ghosts,” but it wasn’t until she had an “accident” that she could do so herself. Her almost-eleven-year-old daughter, Melissa, was born with the gift, but Alison would have to be content with having fledgling ghost-seeing ability and limited success as a private investigator. Even Detective Lieutenant Anita McElone of the Harbor Haven Police Department claimed she was a “bad detective” and needed their help. Thanks. Loretta was acting very strangely and finally admitted to Alison that she had been seeing someone. “I’ve been ... seeing your father.” Her father, Jack, had been dead for five years. It was painful because Alison was his “baby girl” and he’d never visited her since he passed over.

When she told Alison that he’d been missing, she began to doubt her mother’s sanity. “Missing,” she thought to herself, “How can a dead man be missing?” Apparently he’d disappeared when Loretta started seeing another man, Lawrence Laurentz, who’d “passed” six months previously. Lawrence was willing to find out where Jack went, but not until Alison found out “who murdered him.” Lawrence claimed someone tossed a toaster into his bath and sizzled him into oblivion. Alison was going to have to enlist the help of two resident ghosts at her Victorian mansion at 123 Seafront Avenue. Paul, who was a former PI, had the “ability to sort of telepathically communicate with other ghosts.” Maxine, well, she could be astronomically annoying, but was great at Internet research.

“Lawrence Laurentz” turned out to be a stage name, there was a blizzard on the way, she had guests to tend to, and they thought she was nuts when she was talking to Paul. Alison had to head to the Count Basie Theatre to talk to Lawrence’s former boss and coworkers. Paul was the brains of the operation while Alison did the legwork. She had a faint suspicion that Lawrence just “might be a dangerous lunatic or criminal,” and she had to work fast. Melissa, who was helping with the investigation, said that Lieutenant McElone claimed there was “something odd about the report, but not the one from the doctor.” There was something odd about the people Alison was investigating and she knew she just might be in deep trouble when someone threatened her. “You had better start looking over your shoulder, because one day I’ll be behind you.” Was that someone planning to make her their next victim?

Things at Harbor Haven get really spooky when a ghost asks Alison to find out who murdered him. Alison herself claimed she was a “lousy private investigator,” but as luck would have it, there were several people on hand who were willing to help her, including her guests and the resident ghosts. The light touch of humor here and there kept the mystery interesting and fun as the investigation moved along. This cozy mystery was stranger than “Ripley’s Believe it or Not” at times, but was thoroughly entertaining as a passel of specters and earthly sleuths got together to find out where Jack disappeared to and who “French fried” poor Lawrence. If you love paranormal mysteries with a good laugh factor, you should check out Alison Kerby and her Harbor Haven cohorts!

Quill says: If you like paranormal cozy mysteries with a touch of humor, E.J. Copperman's Haunted Guesthouse Mysteries will keep you laughi