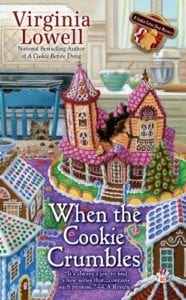 Everyone in Chatterley Heights was gearing up for its 250th anniversary, including Olivia Grayson, owner of The Gingerbread House. ‘Livie’ and her best friend and partner in the store, Maddie Briggs, were planning to cookie it up big by creating a gingerbread replica of the Chatterley Mansion. The whole town was ready for the pomp and circumstance and no one was more prepared than Mayor Karen Evanson, who was more fluffed up than Puffed Wheat. Quill Latimer, the town historian, and Aloysius Willard Smythe, more commonly known as Mr. Willard, were making sure their somewhat overly opinionated voices were heard in committee meetings. Frederick P. Chatterly, the town’s founder, would have saluted the lot of them. Salud!

All was well until Paine and Hermione Chatterley unexpectedly showed up to lay claim to the town’s favorite mansion. Ms. Evanson wanted “proof of identity” and in return Paine retreated and put the kibosh to the upcoming festivities. “Chatterly Mansion will be closed to the public during your little celebration.” The Chatterley’s might have been a royal family in England, but they were nothing but a royal pain in the Heights. Even Hermione thought that Paine took some delight in being miserable but the man was going to be even more miserable than he could ever have imagined ... he was soon found floating face down in his tub.

Olivia’s “special friend,” Sheriff Del Jenkins, put the cuffs on Binnie Sloan, but something wasn’t adding up. There were way too many people who had a key to the Mansion and even more who had reason to bump off Paine. It was rumored that there was a fabulous collection of rare cookie cutters secreted away somewhere in the Mansion. Would someone kill for those? And then there were the unexpected descendents of Freddie, who were the result of his little dalliances. Secrets and lies started coming out of the woodwork, but Olivia and Maddie were determined to find out the truth. It even came to light that Paine had actually “signed his own death certificate.” What on earth was going on in Chatterly Heights?

This cozy mystery is more whimsical and delectable that a batch of snickerdoodles just out of the oven. The recipe for murder was intriguing as the plot thickened with all sorts of possibilities as to why someone would want to consider drowning poor Paine Chatterley. I loved traveling with Olivia and Maddie as they tried to figure out whodunit, something that wasn’t easy in light of the complexity and quirks of the Height’s residents. I was especially tickled to discover that Virginia Lowell does her research and knew about Linda Campbell Franklin’s book on kitchen collectibles, a well-worn book I adore. This cookie-cutter series is the crème de la crème in the cozy genre!

Quill says: When the Cookie Crumbles is a delightful cozy mystery that is as good as any cookie recipe you can whip up!