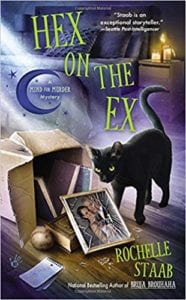 If Stan hadn’t been such a slacker Liz Cooper’s remodeling job would have been done like yesterday and she wouldn’t have to shower at the gym every day. Not that she minded working out, but the Studio City gym belonged to her ex, Jarret, and his business partner, Kyle Stanger. “I’m a psychic. I read auras,” pronounced Tess after making a declaration about a gal on a reality show they were watching at the gym. Oh, seriously? Liz was a psychologist and could tell a lot about people sans the New Age stuff. She’d also known that when she found Laycee Huber’s bra under her bed that was the end of her marriage. Big time baseball pitcher or no, she was done.

Some people believed in that superstitious mumbo jumbo, including Liz’s mom, Vivian Gordon, whose “mystical whimsies” were old hat. She clung to those whimsies like they were going out of style and also clung to the idea that Liz and Jarret would get back together. Not gonna happen because Liz was seeing Nick Garfield, a professor at NoHo, who was actually teaching a class in occultism. Baseball was still fun to watch and Jarret was a star pitcher for the Dodgers and the whole family was heading to the game. Unfortunately, so were Kyle and Laycee.

“This conversation is over,” Liz harped at Laycee, “You’re dead to me.” Laycee wanted to use Liz’s contacts to cheat on her husband, but that wasn’t going to happen. It was just one of those crazy days and even Jarret was freaking out over a pigeon that spooked him when he was on the mound. Nick claimed that white pigeons were “death omens.” Liz would live to rue the day when she told Laycee she was dead to her when she showed up exactly that ... dead in Jarret’s bedroom. There was the little matter of her being there that very afternoon. Had someone mistaken Laycee for Liz? If she didn’t find out who the murderer was, it wasn’t going to take a soothsayer to figure out who was next.

Liz Cooper has to delve into the unknown to solve a ghastly murder. Liz is a somewhat more sophisticated sleuth than most I’ve encountered in cozy mysteries, but no less appealing. There are plenty of no-account losers and suspects for her to ferret out and Liz really has to work hard to figure out whodunit. From the bloody symbol on the corpse to the voice that crooned, “Why don’t you die?” and everything in between kept me turning the pages. Nick is a perfect foil for Liz, but the two-timing Jarret adds a lot of color to the plot. If you want a good solid mystery with a lot of “weird” thrown in for good measure you’ll love this series!

Quill says: A dollop of sophistication mixed with the occult make for excitement in the "Mind for Murder" mysteries.