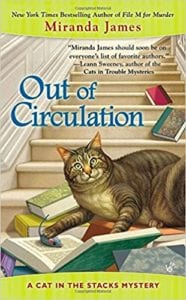 Charlie Harris cringed every year when the Friends of Athena Public Library got together to decide where their annual gala was to be held. Diesel, his rescued Maine Coon cat, was probably more refined when he met up with an alley cat. "Vera, honey," crooned Miss Dickce, how is your poor brother doing these days? Is he comfortable down at Whitfield?" Naturally a question like that set Vera off like a firecracker because Whitfield was the local nut house and brother Armory was "crazy as a betsy bug." They were trading more barbs than were on a fish hook, but once they quit sticking it to each other, it was decided that the gala would be held at Miss An'gel and Dickce Ducote's antebellum mansion, River Hill.

Charlie knew the decision had already been made when he had his invitation in hand before the meeting closed. Vera Cassity was a force to be reckoned with and she'd be sure to exact her revenge. "How come you let that trash in this house?" Azalea Berry, Charlie's housekeeper, was incensed. It seemed that polite society had gone on vacation, least ways for the evening. Granted, Vera had grown up on the wrong side of the tracks, but why did even sweet Azalea detest her? Even Charlie wasn't going to be immune to Vera's wrath when she came to see him and Diesel in the library archives. Well, maybe Charlie because she didn't much like Diesel.

Vera threatened to get Charlie fired because he wouldn't let her examine the Ducote archival papers. Miss An'gel later prophetically declared, "Vera is headed for trouble, the kind of trouble she may never survive." When the gala rolled around, Charlie picked up Helen Louise, who was also feeling the sting of Vera's wrath. Azalea and Vera were at each other's throats again: "... pure evil. The Lord gonna strike you down one day for all your lies, and I'm gonna be there to sing his praises." Unfortunately for Azalea, she just might be singing behind bars because Sheriff Gerald Tidwell thought she helped push poor Vera down those little 'ole antebellum stairs!

Charlie Harris and Diesel really have their work cut out for them at River Hill. This fun and fabulous mystery was not only humorous, but fairly complicated. I couldn't help picture Carol Burnett and her curtain rod dress taking a tumble down the stairs as Vera was dressed as Miss Scarlett O'Hara. There were many intriguing elements in this cozy mystery including those mysterious archives, a journal, and hidden animosity that made it scintillating and a tad silly. This is Charlie's fourth encounter with a dead body and when Kanesha Berry yells, "I'm going to need your help. My idiot boss thinks Mama killed Vera Cassity," I knew it was going to be one of the best yet. And it sure was!

Quill says: This is one cozy mystery that will really be "in circulation" for a long, long time because it's sizzling hot, Southern style!