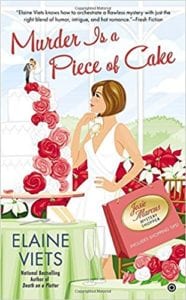 Harry the Horrible had finally given Josie Marcus a plum assignment for once. Mystery shopping was definitely a dead-end job, but as a “bride on a budget,” checking out Denise’s Dreams would be fun for once. Josie never expected to meet and fall in love with veterinarian Ted Scottsmeyer, especially since she was a single mom. Amelia was a ‘tweener, but she seemed pleased to welcome Ted into the family. Lenore Scottsmeyer Hall, no doubt, had descended from the Social Register and acted the part. Stuck up. Molly turned out to be the perfect salesperson, tending on every perceived need of Josie and her fiancé. It was an amazing coincidence that both of them were engaged to a “Ted” and both of them were into animals.

“I am getting married,” Ted firmly stated, “But not today and not to you.” Molly Ann Deaver had shown up at the office declaring her intentions, expecting to be married within the hour ... to Josie’s Ted. The National Enquirer couldn’t have done it up better when Molly grabbed a scalpel, threatened to slit his throat, and Lenore lunged forward to save the day with her snub-nose thirty-eight. The horrifying moment was caught on a security camera and soon Ted’s mother was on a Channel Seven special report. Dr. Scottsmeyer’s “pistol-packing mama” was a minor celebrity and Josie had more egg on her face than went into a ten tiered cake.

Josie wouldn’t have much time to dwell on her future mother-in-law’s embarrassing fifteen minutes of fame when she discovered bridezilla in the parking lot of Ted’s office. Only this time she wasn’t delivering blueberry muffins or making insane demands. There would be no more muffins and no more stalking because Molly Ann Deaver had been shot in the head. Somehow Detective Richard Gray was not at all surprised to find Josie on the scene, but one thing for certain was that she was going to have to find out whodunit. It looked as if Lenore would be facing murder one and Josie’s fairytale wedding might be on hold indefinitely. She had to work fast, but when another corpse showed up on her watch, Josie was positive her wedding bells might would ringing ... behind bars!

Josie Marcus and her “pre-wedding disaster” will definitely tickle the reader’s funny bone. When Molly Deaver came on the scene it certainly threw a wrench in Josie’s wedding plans. Lenore Scottsmeyer certainly added a huge dollop of flavor to the mystery with her over-the-top buttinsky attitude. I was amazed at the balancing act Josie had to perform trying to deal with everything at once. Not to be outdone, this indomitable sleuth kept plodding along trying to figure out who killed the bridezilla, all the while planning her wedding. The characters were charming, slightly wacky, and just delightfully daffy enough for me to want to read more in the series. If you like your mysteries light and fluffy, just grab a blueberry muffin, a cup of tea and you’ll have just the recipe for a great read!

Quill says: If you adore cozy mysteries, The Josie Marcus Mystery Shopper series is sure to please!