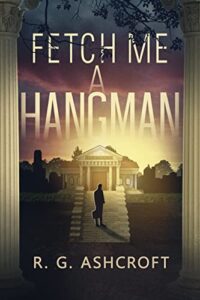 When you’re looking for the epitome of a “country lawyer” based in one of those towns with memorable characters that remind you of the same quirky people who lived down your own block when you were growing up, then Brandeis Fields is the man you want to meet.

Yes, there are literally a plethora of lawyer books out there, and it is very difficult to find one that has a new feel to it. But it took me only a few pages before author R.G. Ashcroft pulled me into his imagination. Once that happened, I was glued there until the very end.

To begin, one of the two daughters of the town’s mayor has been found strangled. The accused just happens to be an annoying person who lawyer, Fields, does not like one little bit. This is also a high-profile case, which is something Fields has no desire to play a part in. However, he has no choice.

The cast soon unveils itself one (by memorable) one, introducing readers to a sheriff by the name of Randy Stiner. Stiner has done his supposed job by collecting the evidence against the accused, yet circumstances arise that shows something ‘not quite right’ may be going on. Fields, along with co-counsel Bill Williams, go on a journey to interview a variety of witnesses. You soon learn that the lawyer may not like the man he’s defending, but he also is a conscientious man who wants to do the job to the best of his ability. His legal assistant, Janet; his own wife, Adair; and his own children, Becca and Peter, also end up shining some light on the case, although that light could end up destroying the lawyer’s own objectivity when it comes to defending his client.

The author never dropped the ball on this one. Every page was an intriguing adventure that brought about thrills and chills to the readers. And those special characters – my favorite being the elderly Ms. Twigg – kept my mind completely engaged. She reminded me of some people I will never forget from my old hometown. That hometown just so happened to also be filled with stately manors and nice, green, well-tended parks, gardens, and lawns. In fact, there was a period where I thought this author was actually walking the streets where I was born while writing this great mystery.

Each layer of evidence is expertly presented and readers will find themselves surprised at a whole lot of turns that appear throughout the story. Brandeis Fields, himself, is old-school. He has a sense of humor, responsibility, and even when he questions things, he keeps that dependable quality you wish all lawyers actually owned. He also allowed me to educate myself on parts of the law I had no idea about before, and did it in a way where I was never bored. Author Ashcroft is new to my repertoire, and I intend to keep my eyes peeled for the next mystery he sends our way. I highly recommend this read!