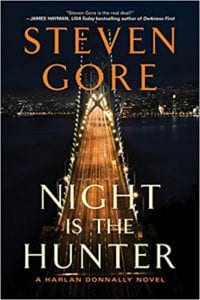 Steven Gore treats his audience to the latest installment of his Harlan Donnally detective series: Night is the Hunter.

In the pristine beauty of winter making way for imminent spring, Harlan Donnally and his long-time friend, Judge Ray McMullin, stand immersed in their thoughts as they unconsciously cast their lines. In the quiet waters at the base of Mount Shasta, Donnelly assesses the troubled expression on McMullin’s face. This was supposed to be a day of fishing. Unfortunately it ended with Donnally’s realization he had yet another case to investigate—a case Donnally didn’t know would be the foundation for vindicating his friend’s death penalty decision. Twenty years before McMullin decided a case that would deposit a man on death row. Now it was Donnally’s turn to expose a corruption that ran far too deep and lay beneath an unstable surface for way too long.

Israel Dominquez was on death row for a gangland murder. He professed his innocence throughout the trial and never changed his story the closer he got to making his final journey to his execution. Sadly, nobody believed him. This is to say until Judge Ray McMullin decided to question his own processes leading to the decision of death (and the twenty year gap between the decision and the imminent day of reckoning is upon him). Was McMullin too young and entrenched in making his own legacy back then? Did his personal mission of notoriety cloud his judgments and has his conscience come back and tapped the Judge on his should before it’s too late? Or perhaps, Dominquez really is guilty and the fact he was a member of the notorious Norteno gang of Northern California solidified his inevitable fate. These along with many other questions were the foundation for Donnally to don his investigative cap once more and hone his skills to get to the truth no matter the damages that would be deposited in its wake.

In the three years I’ve been a book reviewer, I find myself often uttering the phrase: “...while I’ve yet to read any of XXX’s work, after reading XXX, I plan to go back and read...” Once again, my promise to do just that will hold true in the case of Steven Gore’s work. It is a sheer pleasure to pick up a book written by an author who clearly demonstrates he had the vision of how he would tell his story from the first paragraph on. In Night is the Hunter, Gore not only demonstrates a confident command of his pen, but displays the obvious: he had a thought and knew how he would play it out across the pages to not only engage his audience, but the end result would be a terrific detective thriller that manages to keep the reader on the edge of his seat throughout the read. If I had my druthers of what it is I like to read in a book, hands down it would be to see an intentional balance between prose and dialogue—dialogue taking the forefront more than prose. Gore portrays the ability to do so in Night is the Hunter. What makes this book even more interesting is his obvious knowledge of knowing his way around a homicide investigation. Why wouldn’t he given his credentials of “...renowned private investigator turned 'masterful' writer...”? Night is the Hunter takes real situations, current events that plague our society today and mixed together, what plays out is one, fine novel. Thanks Mr. Gore! This is a great read and I look forward to future adventures of Harlan Donnally.

Quill says: Night is the Hunter is a detective thriller that will have the reader engaged from the opening paragraph to the proverbial ‘the end.’