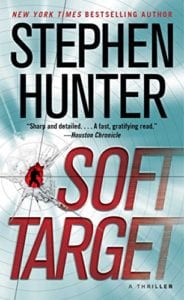 America, the Mall, an enormous mall on the outskirts of Minneapolis is abuzz with excitement. It is Black Friday and the huge mall is jam-packed with shoppers trying to get the latest deal. The amusement park rides are running and a little girl is sitting on Santa's lap, telling the jolly man what she wants for Christmas. All is well until somebody shoots and kills Santa while the little girl talks. Chaos breaks out as a terrorist group, the "Mumbai Brigade," herds all the panicked shoppers into the center of the mall where they plan to kill helpless shoppers and get their message out to the world.

Ray Cruz, who many readers will have met from Hunter's previous book, Dead Zero, is in the mall shopping with Molly, his fiancée when the terrorists strike. A retired Marine sniper, he may be the only hope for the 1,000 shoppers being held hostage. After seeing to the safety of Molly and some other shoppers who he hides in the back of a store, Ray goes to work.

This rapid pace thriller takes place all in one day, in fact, within seven hours it's all over. There isn't much time for Ray, or the reader, to take a breath as there is something happening on every page. The action shifts between Ray, the terrorists, a news crew, other snipers, as well as the police. Add in a bit of cyber warfare, and a storeowner with an agenda, and you'll be eager to find out if there's more to the terror attack than a group of teenage boys with guns. Without a doubt, the sections featuring Ray are the standouts and while his fiancée fades to the background, keep an eye out for Lavela Oates. Ms. Oates was doing her best to get through her first day of work at a day care center in the mall and she's not about to lose her job over some crazed jihadists. While some may find the Somali terrorists a bit too predictable in their insane plans, others will see this as a great action thriller and a story line that could well happen one day.

Quill says: Those who like their thrillers to start fast and never let up, won't be disappointed with Soft Target.