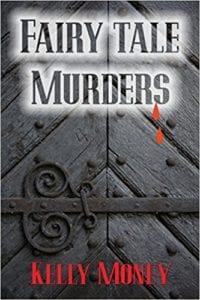 This book is definitely not a fairy tale in the usual sense. This is about Stan, whose mother read him fairy tales when he was a child and he brings these fairy tale princesses to life in his mind, kidnaps and murders them.

Starting at the beginning, Stan’s father is the owner of Country Haven Mortuary and Stan works for him. Stan takes a lot of guff from Dad and ends up watching his father die of a stroke right before his eyes. When Dad is gone, Stan calls 911 and rids himself of his whiny demeanor and becomes 'Stan the Man.' Stan is now very different in his dealings with the public as he now has a great deal of freedom to do as he wishes. Stan soon discovers that he can get satisfaction by murdering women who resemble the women in the fairy tales his mother read to him as a child. Stan meets Kristen, who is going through the devastation of her mother’s death. Unfortunately for Kristen, her mother's services are to be held at the Country Haven Mortuary. Kristen becomes Stan's first victim, turning up missing after her mother's death.

Kristen’s best friend is Kate Kingsley, a police detective, and she and her partner Harper are investigating the trail left behind by Kristin. They keep seeing signs of Country Haven everywhere they look for clues. Stan is getting quite disturbed by the fact that the detectives are always showing up at his place of business. Kate can’t figure out that the Mortuary’s phone number keeps coming up on her missing friend’s home telephone. Kate, of course, thinks that she will never see her friend again, but is determined not to give up until this case is solved. In the meantime, other women are coming up missing. However, there is one clue at all the various scenes; a book of fairy tales.

This story is a real creep fest as Stan goes about his business, operating the family funeral home. As the owner of a funeral home, he of course has a crematorium which is a perfect way to hide evidence. He begins to find women who look like the pictures and descriptions of Sleeping Beauty, Rapunzel and other fairy tale women and makes them his own, stalking them and using chloroform to put them to sleep, after which they find themselves strapped to a table in the basement of the family business. Meanwhile, Kate continues to investigate her friend's disappearance and it appears she just might become Stan's next victim. Will she find herself strapped to that table or will she solve the mystery of the fairy tale murders?

Quill says: Readers will turn on lights and look under the bed while reading this one.