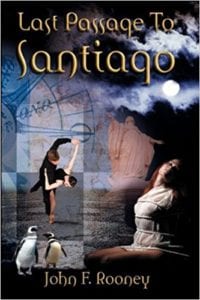 In John F. Rooney’s latest novel, Last Passage to Santiago, the reader is taken on a whirlwind tour of Buenos Aires as well as the Falklands, Chile, and several surrounding islands, at the same time being drawn into the lives of the main characters.

Stephie Ably-Ranier is a woman stuck in a loveless marriage. Her husband Ben is a lout with a capital “L,” having had several affairs and unwilling to change his philandering ways. As a last attempt to salvage their marriage, or as Stephie has decided, one last fling before she files for divorce, the couple decide to go on a vacation that includes a stay in the Argentinean capital followed by a two week cruise.

The story begins as the tour comes to an end, with the unhappy couple getting into a car to be taken to the airport. Along the way, the car is forced to stop, and Stephie is kidnapped. Who are the kidnappers? And why was Stephie targeted? The reader will have to wait to find the answers as the story jumps back to the beginning of the vacation and recounts the events leading up to the kidnapping.

Ben, a self-absorbed, cheating husband, has the nerve to book a room at the hotel as well as a cabin on the cruise ship for his lover Ann. Throughout the story, he does his best to play the loving husband in between frequent sexual encounters with Ann. Meanwhile, Stephie keeps herself busy with exploring the local flavor of each new area they visit.

As the plot thickens, Stephie starts to feel as though she is being watched during her daily rounds of Buenos Aires. Because she works for the National Security Agency, she suspects she might be a target and calls her boss in Washington, DC to confer. Once reassured that all is well, Stephie continues with the trip and boards the cruise ship. As new characters are introduced, each becomes intertwined with the others, and soon the reader questions their motives; is that the one who betrays Stephie?

Rooney does an excellent job of building the suspense throughout Last Passage to Santiago. The reader is kept guessing as to who are the kidnappers, and why Stephie was kidnapped. These questions hold the reader’s attention up until the last few pages. But there is much more to this story than just figuring out ‘who dun it.’ The various characters are rich, their stories intriguing, and what part they play in Stephie’s life keep Last Passage to Santiago moving briskly to its conclusion. An added bonus is that the author takes pains to explain, through the use of tour guides and cruise ship employees, the various countries and islands in this South American based novel. Finally, if you’re wondering why there are penguins on the cover of this book, yes, they play on integral part in the story.

Quill says: Rooney has hit his stride in this fast-moving suspense novel.