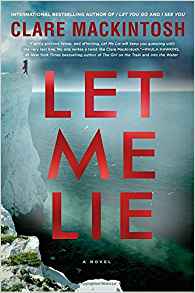 Clare Mackintosh delivers a terrific plot of diabolical twists and turns in her latest novel: Let Me Lie.

Tom and Caroline Johnson took their respective lives within a year of each other and their daughter Anna is left behind to wonder why. Suicide is the ugly truth that haunts Anna daily since her parents have died. Grappling with the tragedy often, Anna’s saving grace in most days is her precious baby girl, Ella. She misses her parents; especially her mother. It would have been wonderful to share the joy of her motherhood with her own mother. On the anniversary of her mother’s death, Anna’s world is rocked when she receives a haunting note. On the outside, the card reads: ‘Happy Anniversary.’ It is the content within the card that rocks Anna’s world: ‘Suicide? Think Again.’

Anna can’t come to terms with the loss of her parents no matter the amount of counseling and time that passes. There is a persistence in her subconscious that refuses to accept both parents chose to kill themselves in less than a year’s time between their respective deaths. Anna spends most days walking on an invisible balance beam of acceptance and sanity. She has a duty and responsibility to her baby girl, Ella. As painful as the reality of never quite knowing the answer to the constant ‘why’ in her mind, it’s time to move on and live her life. Mark, her paramour and Ella’s father wants what is best for them. While he started out as her counselor who Anna sought after her mother’s passing, he quickly recused himself when he realized he was falling in love with her. However, it was Mark who encouraged her with gentle baby steps to return to life with the hope that some day she would say ‘yes’ to his many proposals of marriage. It’s not that Anna didn’t want happily ever after. It was that the past kept coming back to remind her there was more to the double suicide of her parents that required further exploration.

Clare Mackintosh launches her audience into a delicious and tangled web of lies and deceit at the onset of Let Me Lie. She challenges her reader with the premise of: ‘was it really suicide or is this a case of the surviving daughter standing on the ledge of crazy about to jump off herself?' There is a consistent element of questioning the motivations of the man Anna loves (Mark) in a crafty way of shining a not so complementary light on him at times. Ms. Mackintosh has a clever way of infusing more doubt by introducing the back story between Anna’s mother and a childhood friend whose paths took very different journeys—Anna’s mother to a life of privilege, her friend; not so much. Just when the reader settles into a (sort-of) acceptance that both parents took their lives, Ms. Mackintosh is at the ready to throw yet another lug wrench into the story line with ample ‘are you sure they killed themselves’ moments. This story has a fantastic ebb and flow throughout and the notion of predictability is non-existent. The twist at the end is one that knocks the reader for a loop. Well done Ms. Mackintosh. How is it possible I’ve not had the pleasure of reading your work before now? I am a fan and look forward to the next.

Quill Says: Let Me Lie is a classic tale of things aren’t always what they appear to be.