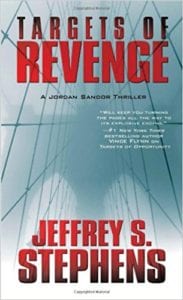 Very smooth….I hung on every word. This is a one-day read because you will be unable to put it down.

There have been two books published by this author featuring Jordan Sandor, an agent of the CIA (Targets of Deception and Targets of Opportunity). Jordan is definitely his own man. He seems to do what he wants when he wants and is always in trouble, but you just keep reading because the plot is so busy. Trouble seems to follow Jordan and his cohorts and his many reprimands from the powers that be are always listened to and he then forgets them and goes his own way. In this new installment, he is looking for revenge. Jordan is on the hunt for “Adina,” a terrorist who enjoys killing and has killed Jordan’s close friend. So, Jordan gathers his team of agents and goes in search of Adina who is hiding out in the jungles of Venezuela.

Jordan crashes a glider in the aforementioned jungle and sets off to assassinate Adina in his lair. He is carrying not much more than a knife and gun when he finds himself faced with Adina’s camp and his many guards. The guards are nothing to this guy who dispatches them one after another and tries to find Adina. On his way to find the terrorist, he comes upon a lab that is packing up tons of cocaine that will be smuggled across the border into the United States. Along with this, he also finds a deadly substance that will be put in with the drug that could cost many lives in the US. So, he puts off the killing of Adina and escapes the jungle and the guards that he hasn’t already taken care of to take this new information to the authorities.

Jordan and his CIA buddies develop intelligence that sends him off to Egypt and then to Moscow as he tries to prevent this disaster from happening. Unfortunately, he ends up on Interpol’s list of international fugitives and that kind of puts a crimp into his plan. Of course, it takes more than that to stop Jordan so it's not long before he discovers that someone on his own side is feeding information to the bad guys. Jordan and his team have uncovered a plan to carry out a terrorist attack on a major US city and now have to stop it from happening.

There is constant action in this third installment in the series that makes you think that Jordan Sandor is at least a Superman in that he does get hurt but always manages to come out on top. I highly recommend this book to all suspense/thriller readers.

Quill Says: I always loved Jessica Fletcher and James Bond, but never wanted to be too close to them as wherever they landed the bodies started piling up. Jordan Sandor is like that. I love to read about him but wouldn’t want to be his buddy. I really loved this book and can’t wait for the next.