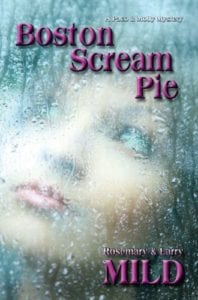 Delylah was a tad tawdry, but she sure knew how to attract a man. Keeping them was another matter, alive that is. She’d only been with Gregg Upshaw for five years, but when he went missing for a few hours she mailed his will to the executor and his obit to the newspaper. When he showed up at the hospital (driven there by her daughter Ellen White no less), it put her in a bit of a bind, but not for long because the old geezer collapsed and died right outside Baltimore Regional when her son Chester Trotter drove up in a hearse all ready to take him home. How very handy. It was an unfortunate turn of events, but Delylah didn’t waste any time. Just because a corpse was still warm didn’t mean she’d have to shed many tears in her hankie because she’d already met Newton Boston, her soon to be fifth.

Southern Maryland was turning out to be a hotbed of unexpected death and offbeat happenings. In Black Rain Corners, Caitlin Neuman had begun having vivid, horrifying nightmares about an accident. She’d lost her parents and twin sister, Corrine, in one many years before, but it wasn’t that accident. The dreams seemed more insidious and urgent. Olivia Rafael, her grandmother, desperately wanted to help her, but didn’t know what to do except comfort her. At school Caitlin’s art class painting suddenly swirled and changed from something she expected to be vibrant and beautiful into an accident scene with a nightmarish quality. Her life was whirling out of control and even sleep couldn’t keep down her demons. She saw two sixteen-year-old bodies flying through the air into the windshield . . . “Caitlin, honey, wake up. You’re having conniption snits.” Molly the housekeeper desperately tried to bring the thrashing teenager out of her night terror.

Caitlin soon turned to “Black Rain Corners’ celebrity detective,” Paco LeSoto for help in unraveling the source of her mysterious nightmares. Paco was, coincidentally, Molly’s “honeybunches” and they often teamed up to unravel the clues to the seemingly unsolvable. He told Caitlin her “request was a tall order,” but he was more than willing to accommodate her. In the meantime things would begin to spiral out of control when the two families unwittingly began to collide. Yet another body was heading to the medical examiner’s office. It was murder, and Molly and Paco had a lot of work to do and a lot of questions to answer. Just how were two seemingly innocuous families connected in murder, mayhem and madness? This body was going to talk.

When I started reading this book, I was uncertain where it was going to be leading me as the format was rather unusual. Structurally it consists of a few different elements. It has an “entangled minds” or new age format, it has elements of a serious thoughtful mystery, yet at the same time is part “cozy.” This is certainly an overly ambitious way to write a mystery, but I was fascinated by a tale that had a little dab of V. C. Andrews mixed with a bit of Leeann Sweeney. The only thing I didn’t care for was Molly’s “deliciously skewed English.” But, believe it or not, overly ambitious or no, the Milds pulled it off and voilá, it was a winner. I loved it!

Quill says: This mystery sparkles ‘n shines and if there is such a thing as a V.C. Andrew’s “cozy” you’ll love it!