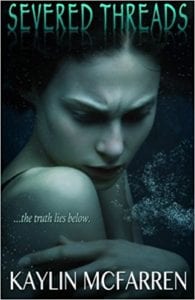 Kaylin McFarren spins a terrific tale of adventure and deceit in volume 1 of her ‘thread series,’ Severed Threads.

Chase Cohen and Sam Lyons plunge from the safety of their dive vessel, Stargazer, into the cold and dark waters of California’s Pacific Ocean. If Chase’s calculations are right, he and Sam are about to resurrect a fortune of a lifetime from the wreck of the Wanli II, the Ming Dynasty emperor’s lost dragon ship. Deflating his buoyancy compensator vest, Chase follows Sam further down the length of Stargazer’s anchor line. Once at the bottom, the men swim beyond their own anchor line on a mission toward the Wanli II where their fortune awaits. The occasional fish and an eel or two doesn’t deter the men from forging forward. The universal diving rule is to never lose sight of your dive buddy. When Chase takes his eye off Sam for what seems mere seconds, Sam is nowhere to be found when he looks forward once again. In a matter of moments, the two men’s destiny would change forever and more importantly, while two men dove into the bowels and depths of the Pacific, only one would return to its surface.

Four years later, Rachel Lyons, the daughter of Sam Lyons, rushes to the museum director’s office. She has a meeting with Dr. Ying to discuss a grant application. However, it’s not some random application. Rather, it’s the application to fund the team of divers who plan to resurrect the fortunes of the Wanli II. The magnitude of the discovery would bring international recognition to the museum, city and community—just what the economically distressed community of San Palo needs. To fortify his argument further, Dr. Ying reminds Rachel of her departed father's passion toward being the one to retrieve the treasure before his untimely death. The mere mention of her father is unsettling. Rachel is immediately distracted from her thoughts when the uninvited interruption of one Chase Cohen bursts into the office. Imagine her horror when she learns the lead diver on the team will be none other than Chase Cohen—the man she believes holds the sole responsibility for her father’s untimely death.

Kaylin McFarren launches a tangible nuance of a quest for treasures and the perils of piracy and of what lies in the depths of the deep, dark sea. Her savvy dive language and nautical knowledge infuses credibility into this wonderfully fast-paced story of mystery and adventure. The action is palpable with many layers ranging from innocents to drug-dealing gangsters who all play a significant role in the mission at hand: find the sunken vessel and its lofty treasure that was lost to the sea centuries ago. McFarren isn’t stingy with her words when it comes to setting the perfect scene that lends way to rich dialogue and edgy banter between characters Rachel Lyon and Chase Cohen. The storyline is captivating in that it doesn’t drag to the point of predictability. Rather, by the end of this delicious body of work, the reader will be left with one last thought: I hope she is working on the next installment of her ‘thread series’! Well done Ms. McFarren!

Quill says: Severed Threads is a great adventure of hidden treasure and the journey toward its discovery.

For more information on Severed Threads, please visit the author's website at: www.kaylinmcfarren.com