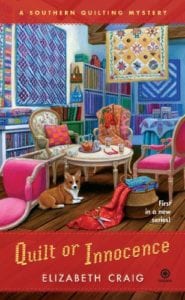 Beatrice Coleman had recently retired and moved from Atlanta to Dappled Hills, North Carolina to be closer to her daughter, Piper. At first glance it appeared to be the type of town where one might find Opie Taylor just around the corner, but she quickly discovered it just wasn’t so. A disheveled, decidedly maniacal woman showed up on her doorstep and attempted to drag her into the neighboring barn for some sort of guild meeting. Beatrice was going to call the police, but Police Chief Ramsay Downey was practically at her door before she dialed 911, claiming “She’s not as crazy as she looks.” Beatrice had just made the acquaintance of Meadow Downey, his wife.

It looked as though her dreams of walking with her corgi, Noo-Noo, swinging in a hammock drinking southern sweet tea and reading the Whispers of Summer, would have to be put aside. The Village Quilters guild was anxious to have her as a member despite her inability to thread a needle. As a folk art curator she knew more about things like the Quilts of Gee’s Bend, but she “was happily ignorant of the precise methods of constructing” any kind of quilt. Needles were a no-no, but Meadow was insistent. Unexpectedly, the members of the guild began to gossip and trash-talk, so much so they could have opened a dump.

Everyone from Posy, the owner of the Patchwork Cottage, to the Potter twins managed to have a bone to pick with Judith. She was doing everything from trying to fleece Felicity out of a valuable Civil War quilt to attempting to put Posy out of business. Piper had warned her mother that the woman never missed “an opportunity to irritate large numbers of people at once.” Beatrice was on an early morning walk with Noo-Noo and accidentally ran into Posy when they spotted something indescribable. “Beatrice, there’s something lying on the ground over there...” It looked like Judith had irritated one person too many in Dappled Hills. Threatening notes soon began arriving on Beatrice’s porch. Would she be able to solve the mystery of Judith’s murder before she became the next victim?

This dazzling debut will keep you on pins and needles as you try to figure out whodunit. Beatrice, a staid patron of the arts, stands out in sharp contrast with the down-to-earth members of the Village Quilters guild, some of whom were six pins short of a bowling rack. Not unlike Beatrice’s book, The Whispers of Summer, this mystery will charm you whether you’re lounging in a hammock smelling the roses or sticking your toes in the sand at the beach. The flow was smooth and the plot was as intricately stitched as a Dutchman’s Puzzle with just the right touch of humor to hold it together. The Dappled Hills quilters are definitely one gang of gals to watch out for!

Quilt says: Pull up a chair, nuzzle up in your favorite quilt, and get ready for a darn good time!