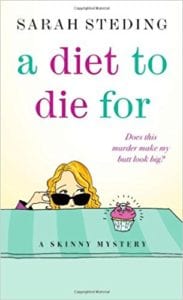 Jen Stevens is stressed to the max. As event planner for the popular Yummy Channel, she’s responsible for putting on amazing events where celebrities and the press mingle. For this evening’s gala, Jen has stuffed herself into a dress that’s well, a bit too tight around the tummy and the Spanx she’s hidden underneath the dress is killing her. Add to that the fact that the guest of honor is late and Jen has more on her plate than she can handle. What a great time to eat a few more of those delectable cupcakes being passed around. Yum.

Tonight’s event is being held at Bess’ Bakery, the shop that started Bess Brantwood’s meteoric rise to fame as the star of the Yummy Channel’s popular Bess’ Bakery show. The occasion? To celebrate the 100th episode of the show and Bess is the guest of honor. While the guests and press have arrived, Bess is MIA. Where is she???

Unable to wait any longer, Jen makes her way to the podium and as she’s about to speak, her ex-beau and bakery employee, Billy Davidsen, pokes his head through the kitchen door to announce that he’s found Bess, and she appears to be dead. Up on the podium, with the news cameras rolling, Jen faints and tumbles right into a cupcake tower.

Jen is brought to her feet by 'yummy' NYPD Officer Alex D’Alby. Embarrassment, frosting on her face and a tight-fitting, too tight fitting dress are probably not the best ways to impress the handsome officer and Jen realizes that her chances with Alex are probably nil. However, it certainly isn’t a time to think about romance when the guest of honor was just found dead in the back alley.

It soon becomes apparent that Bess didn’t die of natural causes. But who would kill her? Jen admits while at the police precinct for questioning that Bess was not the most likeable person at the Yummy Channel. In truth, she knows that most people hated the diva. A list of suspects might actually be pretty long.

When Billy shows up at Jen’s doorstep with Bess’ diary, a diary he found at the bakery the night of the murder, things go into overdrive. Jen, with the help of Alex, and her good friends Gabby, a food blogger, and Elizabeth, a life coach, work to solve the crime AND start a new diet.

The cozy mystery genre is exploding with new series hitting the market virtually every week. Some are fun, some are quite silly, but how many have main characters that the reader can truly identify with? Honestly, how many of us are going to solve a murder? But Jen Stevens is an ‘everywoman.’ She’s stressed, always trying to eat fewer carbs, get into that slinky dress, and looks with a bit of disdain, and jealousy, at that co-worker who managed to drop some pounds and get a new boyfriend too. She’s a super-fun, likeable character who, like the other characters in the story, come to life within the first few pages. The mystery is fun, and there are clues sprinkled throughout but you must pay attention. There’s also a nice dose of humor (for example, a ‘cat’ fight that includes plenty of cake and flung insults such as ‘chubbster’ and ‘Skeletor’) that helps keep the atmosphere light-hearted. Add in a hint of romance and you’ve got the perfect cozy mystery.

Quill says: Kudos to the author for the first in her ‘Skinny mystery’ series and apologies too because she needs to get right back to her computer and start book 2. We’re waiting, cupcake in hand!