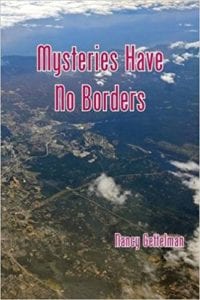 March in Milwaukee, Wisconsin is, honestly, dreary. Spring hasn’t quite arrived and everything is a bit gray. That’s why Sara Schneider jumps at the chance to attend the International Craft Brewery Convention in Victoria, British Columbia where, promises her husband Robb, the flowers have already begun to appear. Robb will attend the convention while Sara takes in the sights of the area with the wife of one of his friends. In a snap Sara has her bags packed and is ready to go!

When the couple arrives in Victoria, they take a quick sightseeing trip before heading to their hotel. Then it’s time for a nice dinner party with Robb’s friend, and fellow craft brewer, Stephen Albright, his wife Diane, and a few other folks. Sara takes an instant liking to Diane, and the evening goes quickly. The food is great, conversation interesting and lively and everybody seems to be having a good time; everybody except Blanche McDonald who appears as though she’d rather have a root cannel than be at the party. Sara is put off by Blanche’s behavior but with everybody else being so nice, she manages to have an enjoyable evening. Even Jane Hamilton, the Albright’s houseguest, whose husband has gone missing in the Arctic, is friendly and approachable. All but Blanche, who is cold to everybody, including her husband Jerry – what is her problem?

The next day, while Robb heads off to the Convention, Sara is taken on a wonderful trip to Butchart Gardens by Diane, Trish (another dinner guest) and Jane; all the ladies from the night before with the exception of Blanche. Sara asks about the missing woman but is only told that Blanche probably wouldn’t enjoy the trip. The day goes by quickly, with Sara (and the reader) learning all sorts of interesting facts about the gorgeous Butchart Gardens.

The week flies quickly as Sara travels all over the city of Victoria. Between the sightseeing and ‘table talk’ at the various dinner parties she and Robb attend, all sorts of facts about Victoria, and Canada, are presented. From the lives of the Intuits’, to the Canadian Shield and local cultural events, the visitors from Wisconsin learn quite a bit. At the same time, Jane, and the rest of the group of new friends, finally learns what happened to her husband. That, however, is not all that occurs in this relatively short (157 pages) novel; Sara and the others are drawn into not one, but two murders.

Mysteries Have No Borders is a relatively quick read that showcases the love and bond between a husband and wife. By the end of the book, Sara has a new appreciation for all that she lovingly shares with Robb. Sara’s interactions with her new friends, too, are part of the fun of the story as they explore all that Victoria has to offer. At points, the dialogue is a bit stilted, as characters explain historical and other aspects of Canada and the story slows when these discussions take place. In addition, there is a fair amount of emphasis on the land and people of Canada – this is not just a murder mystery, but a tour of the Canadian province of Victoria.

Quill says: A fun murder mystery that offers plenty of background on the great land of Canada.