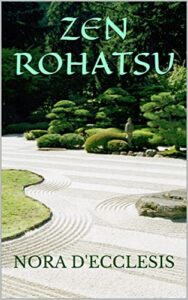 The author's opening chapter describes her personal experience of Rohatsu, a ritual of meditative zazen named for the timing of the ceremony which in modern times has evolved to fall on December 8th each year. “Rohatsu begins with the sound of an ancient gong” and is meant to duplicate the steps of the enlightenment of the Buddha. It includes classic seated meditation and much walking in circular paths indoors and out, all accomplished in total silence, giving each participant scope to experience mindfulness.

Zen is one aspect of Buddhism that has gradually developed over the centuries since the birth, life and passing of Siddhartha Gautama Buddha. Siddhartha was the son of a Nepalese, Hindu king, heir to all the luxuries that station implies. But after he achieved manhood, he began to wish to see what lay beyond the walls of his father’s castle. Once he did so he saw things he had never before confronted – sickness, old age, and death. This led him on a path of asceticism and eventually to being revered as a spiritual teacher of the Eightfold Path, which D’Ecclesis presents along with other concepts for her readers. The art of Zen developed through the fabled teachings of Boddidharma, the 28th Patriarch of Buddhism, and through the conversion of Ashoka, a famed King of India. Jesuits and other mystic thinkers brought Zen to the Western world, along with the arts of the Japanese tea ceremony, the poetry known as haiku, and the modern concept of mindfulness.

D'Ecclesis concludes her enlivening look at Zen with detailed advice for meditation encompassing postures, breathing techniques and mala beads, offered for readers who want to inculcate this ritual into their lives as she has done. She was fortunate to have direct exposure to Zen in her college years, and has written best-selling, award-winning books embracing similar subject matter, including Multicultural Mindfulness: Nourishing the Soul and Haiku: Natures Meditation. This current work is diligently researched, combining historical reference with tender, personal touches to provide outreach to those new to the subject matter.

Quill says: In Zen Rohatsu, D’Ecclesis has created a straightforward guide to the concepts of Zen with the potential to attract fresh attention to this time-honored, proven means of mental and spiritual self-examination.

My Child Told Me They're Trans...What Do I Do?: A Q&A Guide for Parents of Trans Children

Taming Infection: The American Response to Illness from Smallpox to Covid

Innovation & Imitation For Nations: The Technological Gap Shock and Nations' Urge to Imitate and Copycat

Who Should We Let Die?: How Health For All Failed, And How Not To Fail Again

Nations from Imitations to Innovations: The History of Innovation & Technology Development in Korea & Japan

The Demogra-Fate Hypothesis: Is Demographic Aging, as seen on Earth, the Natural Death of all Intelligent Species in the Universe?

The Saint Next Door

It's All In The Delivery: Improving Healthcare Starting With A Single Conversation

The World Almanac and Book of Facts 2020

Eating for Pregnancy: Your Essential Month-by-Month Nutrition Guide and Cookbook

Ripley's Believe It Or Not! Beyond The Bizarre (ANNUAL)

My Garden of Flowers: Miracles in the Neonatal Intensive Care Unit

Into the Hands of the Soldiers

Cork Dork: A Wine-Fueled Adventure Among the Obsessive Sommeliers, Big Bottle Hunters, and Rogue Scientists Who Taught Me to Live for Taste

It's All a Game: The History of Board Games from Monopoly to Settlers of Catan

The World Almanac and Book of Facts 2017

When Mountain Lions Are Neighbors: People and Wildlife Working It Out in California

Ripley's Believe It Or Not! Unlock The Weird! (Annual)

Palimpsest: A History of the Written Word

A Parent’s Guide to Public Education in the 21st Century: Navigating Education Reform to Get the Best Education for My Child

The Last Thousand: One School's Promise in a Nation at War

In a Different Key: The Story of Autism

The Wild West of Louis L'Amour: An Illustrated Companion to the Frontier Fiction of an American Icon

Ripley's Believe It Or Not! Eye-Popping Oddities (ANNUAL)

TIME-LIFE Mysteries of the Criminal Mind: The Secrets Behind the World's Most Notorious Crimes

TIME-LIFE Mysteries of the Unknown: Inside the World of the Strange and Unexplained

Ripley's Believe It Or Not! Reality Shock! (ANNUAL)

One Woman Farm, My Life Shared with Sheep, Pigs, Chickens, Goats and a Fine Fiddle

Behind the Smile During the Glamour Years of Aviation

Ripley’s Believe It or Not!: Dare to Look!

Bible Bullies: How Fundamentalists Got The Good Book So Wrong

The Impending Monetary Revolution, The Dollar and Gold

Theft is Legal: Gain Perspective from 13 Economic Stories and Concepts

Tilogos: Treatise on the Origins and Evolution of Language

1001 Gardens You Must See Before You Die