Blotto, Twinks, and the Ex-King’s Daughter 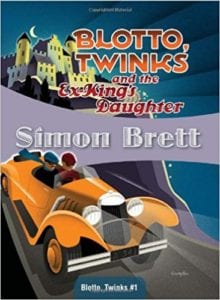 If you couldn't tell from the title alone, this novel is extremely hysterical! From the characters to the locations to the murder mystery, itself, Mr. Brett has done a fantastic job of writing a story that will keep you guessing until the end, as well as bringing back a type of Miss Marple that the world has been missing for a long, long time.

The Dowager Duchess of Tawcester (pronounced Taster) is in charge of Tawcester Towers, and is having a gathering of folks over to the Towers for a drinking/conversational weekend. The Tawcester Towers boasts one of the finest libraries in the country because the generations of Tawcester's from Rupert the Dull to Rupert the Libertine had a love and respect of books (as long as they didn't have to read any). Now, this library has seen many misdeeds over the years, including a death of a domestic in 1820, who was hit on the head by a statue of Homer that wasn't sitting correctly on its' base. A death of a domestic is a real pain to clean up, but this time the police have to get involved and the Dowager has a real headache.

Her two children, Lady Honoria who is called Twinks by the family and, Devereux Lyminster, who is called Blotto, are the main characters in this strange crime. Twinks is all brains. Although everyone finds her stunningly beautiful, she has no use for looks. She only wants to show the fact that her intellectual skills outweigh everyone else's...especially her brother's. Blotto is a nice man who is equally lovely to look at and a great hunter, but his brain doesn't exactly work well and the words that come out of his mouth (like hoopee doopee) are irresistibly moronic and charming at the same time.

When the body of a Captain is found poisoned in the library, Twinks takes it upon herself to get pictures and search for clues before the bumbling cops arrive. She and her brother have to comb through the guests in order to find out who killed the Captain. Was he a spy? He certainly worked for the ex-King of Mitteleuropia who is staying at the Towers along with his two suspicious guards, or goons, that surround him at all times. Also with the ex-King is his lovely child, the ex-Princess of Mitteleuropia who is on the hunt for a husband - and she has her eye on Blotto for that particular job.

As the information is ferreted out by Twinks, she finds that the ex-King was usurped by his brother who took over the kingdom and threw his sibling off the throne. Soon, Blotto finds himself having to visit the kingdom of Mitteleuropia in order to solve a puzzle and rescue a princess. And the scenes are absolutely hysterical.

With characters such as Corky the Chauffer, the Keystone Kops for the police force, and a variety of schemes including a kidnapping plan, another murder, and a government overthrow, this mystery is filled with fun and frenzy.

Quill says: This book is beyond enjoyable! Simon Brett has a long history of writing fantastic mysteries that are a whole lot o' fun and this is no exception. The best part? This is only the first in the Blotto and Twinks mystery series so, thankfully, there's even more to come!