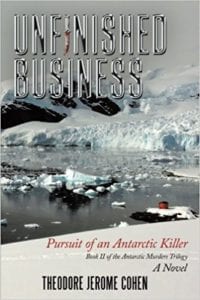 Captain Roberto Muñoz of the Lientur had lain in wait to seek revenge for the murders of Army First Sergeant Leonardo Rodríguez and Lieutenant-Commander Cristian Barbudo. It was not so much the fact that they left Leonardo on the ice to be devoured by the orcas, but rather the death of Cristian, a close friend, that ate at the very core of his being. Muñoz was beyond caring about the consequences of his actions and had already spirited away a virtual fortune from the insides of a refrigerator, a gift intended for Rodríguez’s widow. Evil would be met by evil. It all began on May 22, 1960 when a 9.5 earthquake rocked Chile. Raul Lucero and Eduardo Bellolio, two Chilean NCOs, had rifled though the security deposit boxes of the Banco de Chile in a vault they were supposed to be guarding. Muñoz was waiting once again for the greedy to fall into his clutches.

Muñoz’s greed exceeded that of his prey and his cunning was inimitable. It had been surmised that Lucero and Bellolio had killed each other in a knife fight, but he was there and knew better. He was now waiting for Chief Warrant Officers Demetrio Ramos and Gabriel Osorio. They too would meet their maker in the blink of an eye, but Gabriel was the one he wanted the most. Watching his blood flow “was the retribution Muñoz exacted for the role Osorio had played in the death of his “good friend, Lieutenant-Commander Cristian Barbudo, during the 16th Chilean Expedition to the Antarctic earlier that year.” (pg. 2) It was a fait accompli and in a few more steps he’d be out of the Fleet Warehouse and would be resting for a few hours by the side of his drugged alibi. No one would ever know he had even seen the men, let alone sent them to their graves.

Muñoz had accepted Cristian’s assignment on the Lientur after he was murdered. After returning to the base, he was quickly informed of the double murder, smugly confident in his ability to elude capture. Perhaps his reasoning power had left Earth with Cristian’s spirit, but he took no notice. Surprisingly, two men would soon visit and shake his overconfidence. One was Corvette Captain Mateo Valderas, a former classmate at the Chilean Naval Academy, and his assistant, Lieutenant-Commander Antonio Del Río, both from Naval Intelligence. Through close association with both men, Muñoz knew that if anyone could find the key to the mystery these two men could and would. An unexpected cat and mouse game had begun, but who were Valderas and Del Río looking for?

Rare coins began to surface in the most unusual places, simply defying the men to catch the murderer. Each coin had something to offer and only the sharpest of intelligence officers would be able to unravel the clues. Valderas claimed, “Whoever it is we are dealing with here always seems to be one step ahead of us. And I get the feeling that he has been one step ahead of us—certainly me—for some time now, perhaps several years.” (pg. 59) Nothing could be found to substantiate the fact that Muñoz was involved. Would Valderas and Del Río have to admit defeat when they full well knew who the culprit was? Would the evil of the Antarctic Circle continue to weave its tendrils into lives of the innocent? “REDDE CUIQUE QUOS SUUM EST.” (pg. 197) Would the mysterious coins ultimately reveal the murderer?

This mesmerizing mystery is like a siren song emanating from the Antarctic Circle, a very deadly song. This book follows Frozen in Time, book one in the Antarctic Murders Trilogy. Unlike the first book, which also introduced the reader to factual materials via extensive footnotes, this book has none. In Unfinished Business the author has sufficiently recapped the first book in the series, but unless one reads the first, much of the excitement and “whys” may be lost in the translation. As much as I enjoyed Frozen in Time, I somehow enjoyed the fast pace this book provided even more. The reader immediately becomes a witness to two brutal murders and realizes that the crafty, somewhat unbalanced Captain Roberto Muñoz has committed them. The excitement and key to the book is unraveling the clues side by side with two Naval Intelligence officers. It is similar to a game of Jeopardy in which we are given the answer, but need to come up with the question. The question is not whodunit, but how did he do it? This well crafted book appeared to be highly fictionalized as opposed to the fiction/nonfiction mix of the first in the series. Regardless of the mix, this fast paced psychological thriller will keep you on the edge of your seat as you rack your brain trying to decipher the hidden clues!

Quill says: If you love reading a good psychological thriller and think you can stay one step ahead of a cunning murderer, you just might want to take a look at the Antarctic Murders Trilogy, a trilogy that will bring out the CSI in you!

To learn more about Unfinished Business: Pursuit of an Antarctic Killer, please visit the book's website at: TheodoreCohenNovels.com