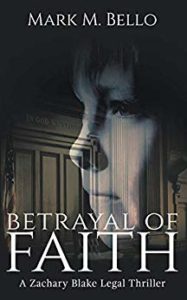 Whether it be Perry Mason, Atticus Finch, or even Turow’s famous lawyer, Rusty Sabich in Presumed Innocent, who was actually pursued by his own kind, everyone out there most likely has a favorite fictional lawyer. You know...the one who when a new book or movie or TV episode came out, you just had to watch, or read, and find out what happens. When it comes to this brand-new lawyer (in my life, anyway), a man called Zachary Blake, I can honestly say that with just his first starring role in a series of legal thrillers written by Mark M. Bello, he has captured my imagination, earned my respect, and made himself a “must-read” for the rest of time.

This is not an easy tale, by any stretch, but I can’t remember when I found a lawyer more riveting. When we first meet and begin to understand Zachary, we learn that he is definitely the epitome of a lawyer and man who’s down in the dumps and is at a point where it may just be impossible to turn his life around and put his career back on track. Changes alter his life awfully fast, however, when Jennifer Tracey decides to become his client.

Jennifer is a woman of unending faith. She believes in the Lord, but is now stuck in a position that brings pain to her heart and could just shatter her faith completely. Recently widowed, saying goodbye to her true love, Jim, she’s now a single parent of two boys: Jake (9 years of age) and Kenny (age 11). A new priest was transferred to her parish when the man the boys felt close to, Father Bill, left. He was transferred to Virginia which caused the boys to feel sorrow again; it was as if their “substitute” father had also died. Worse was that he was replaced with Father Gerry, a man Jennifer soon finds out brought harm—and not friendship or kindness—to her two sons. But, don’t shy away just because you “think” you’ve read this plot before. It’s not just a lawyer against a sick man who wears a cross around his neck in order to get away with sin; this abuse has links to something on a much larger scope: The Coalition. This is one organization that is not only a “secret” club run by the church, but it’s also run by a man who’s drunk on power and will stop at nothing to protect this group who needs to, quite literally, be punished by God on high in order to receive the right amount of wrath.

Absent the Lord being able to wreak vengeance, Zachary steps in with his P.I., Micah Love. Zachary needs to get his head on straight, so to speak, as his life has been made up of binge drinking at strip clubs after his wife kicked him to the curb and took everything. But somewhere deep inside this man’s soul lies the intelligence, ego, and ability that once made him “Detroit’s King of Justice.”

Clues start to add up about this sinister church group, including the fact that Zachary and Micah discover two families actually “disappeared” after they had an encounter with Father Gerry; as well as finding out that a person who could have provided much-needed information about The Coalition died under mysterious circumstances.

But with Jennifer’s determination, Zachary will rise up from the darkness he’s been in for a while and fight with everything he has—both in the courtroom and outside of it. Readers will immediately get pulled into Zachary Blake’s intuitive mind, and it is not an overstatement to say that they will be entertained throughout the entirety of this tale that actually makes Detroit thrilling.

Quill says: The greatest thing you can say about a book will be said here: Book II awaits, and everything will be set aside in order to dive right back in to Zachary Blake’s life!

For more information on Betrayal of Faith, please visit the website: www.markmbello.com