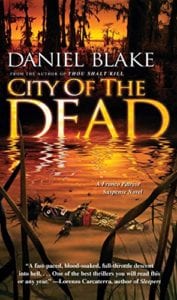 When this book begins, Franco Patrese, a police detective from Pittsburgh is taking a well-deserved rest in Khao Lak, Thailand and enjoying himself at long last. He is on the beach walking when he notices the odd way the surf is acting and pulling the water way out to sea. Patrese has seen this before and knows that a Tsunami is coming and tries to warn the beachcombers. He helps as much as he can but there are many casualties including a young woman that Patrese had spent some time with.

When he arrives back in Pittsburgh, he doesn't get a very warm reception. He becomes the scapegoat in a crime that goes bad; a crime that kills his partner. Franco decides that he will look elsewhere for work and calls a friend in the FBI. He gets hired by the Agent in Charge in New Orleans, Louisiana.

When Patrese arrives at his new job, he learns that New Orleans is being inundated with some horrible crimes that look like they are inspired by Voodoo rituals of some kind. He comes in contact with a very wealthy man, St. John Varden in the city and the man’s son, St. John Varden, Jr., who is the present Governor of Louisiana. When Franco starts work he is partnered with detective Selma Fawcett who is not fond of the FBI and tries to get rid of Franco at every turn. The first case that they partner on is the murder of Cindy Rojciewicz, who is the elder Varden’s Personal Assistant. She was killed in a horrific fashion that included dismemberment and a very large snake. There are more killings in the future and as these two try and figure them out sometimes the murder scenes get caught up in Voodoo, politics, drugs and some very interesting characters, including a lady who takes care of BIG snakes. But the snakes that crawl are not as bad as the snakes that walk on two legs.

There are a few surprises but they are mostly things that crop up in schemes to change the city as Hurricane Katrina comes down on New Orleans full force. There is the usual political corruption and horror for the people who believe in the occult.

Quill Says: This is a good story but a bit convoluted in some parts. For readers who are familiar with New Orleans and the culture there, it will make sense. Sometimes it’s hard to read through some of the difficult scenes of crime and corruption. The book starts with a tsunami and ends with a hurricane and there's a lot of murder and mayhem in between.